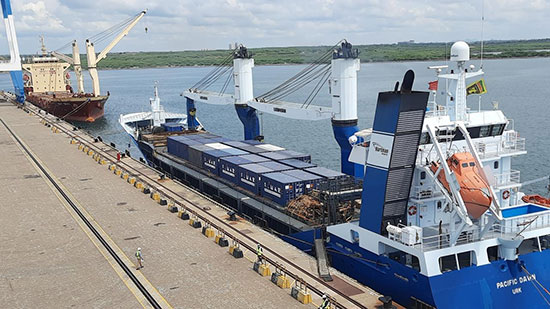 The military cargo containers exported by a South African company were transshipped via HIP, to Pakistan and Abu Dhabi. The discharging vessel ‘MCP Graz’ was bound to Tuticorin with a shipment of cashew from South Africa.

Two transshipment feeder vessels which were idling at the Colombo Port anchorage for approximately 7 days due to increased congestion, called at the Hambantota International Port (HIP) last week. HIP came to their rescue, by providing berths for both vessels simultaneously to facilitate a seamless transfer of containers carrying military cargo. Given the nature of the cargo, the transfer of the containers from MV ‘MCP Graz’ to MV ‘Pacific Dawn’ was carried out under full compliance of international maritime standard safety regulations.

Tissa Wickramasinghe, COO of the Hambantota International Port Group said that this was the first time the port handled a direct ship to ship transfer of transshipment containers. “Currently the only constraint we have in handling container vessels on a regular basis, is the limited number of ship to shore cranes, and their outreach. But we are happy with the outcome of this transshipment operation, as our crane operators showed their professional competence and were up to the task.”

The COO added that the installation of larger cranes capable of handling the new mega carriers, is already in the pipeline, and will be in place in time to meet the demands from the fast developing Port industrial zone and the Mirijjawila export processing zone. “The development of local gateway cargo will be the catalyst to attract more transshipment volumes over the Port of Hambantota, which is opening up as a gateway port to service the industrial zones.  Recently, the first BOI project with an international foreign manufacturer Shandong Tire Co., was approved to operate within the Port industrial zone. With the imminent commencement of the factory construction, the gradual movement of containers will commence shortly. The annual container throughput of this USD 300 million project  factory alone, is estimated at 45,000 containers.”