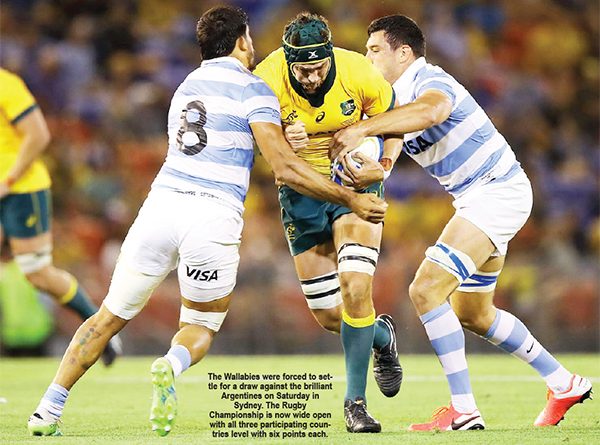 This match was played in Newcastle, Sydney, between two teams who are getting a reputation for playing rough and tumble rugby rather than the silky-smooth running and passing game that is what rugby union is about, at least to this writer!

The Wallabies kicked off deep into Puma territory and were obviously looking for an early penalty to bring their placekicker Reece Hodge into the game. The Pumas’ (and the referee) duly obliged and in the second minute a gift penalty right under the posts was converted. Wallabies into the lead 0 – 3. The lead didn’t last very long and in the fifth minute, the Pumas got a slightly more difficult penalty mid-right and around 25 meters away from the post. Sanchez who scores almost all the points for the Pumas these days did the needful and 3 – 3 it was in the sixth minute.

The first scrum of the game was in the 12th minute and it was a rather messy affair, but the Aussies got the ball out and worked the line. Hunter Paisamy at no12 saw a hole in behind the Puma line – a kicked left-footed grubber that had Jordan Patai, the 20-year-old no13 haring after the ball. However, he didn’t quite make it and managed to touch down only when the ball was on the dead-ball line. This was the one and only occasion that anyone from either side (except for once when the Aussie winger went over from a forward pass) came even close to crossing the try line, in the entire game! Now, this event has been described as a tight game and even a bruising encounter, yeah sure but what was the sport? Was it boxing, wrestling, or even a new game called baiting the ref?!! It sure wasn’t rugby football that I would pay money to watch.

The Australians continued to dominate, had most of the possession (around 70%), and played most of the first-half in Puma territory but were unable to threaten the Puma line or even come close to crossing it. Fierce, uncompromising defence from the Pumas was evident for sure, but do top-class rugby union sides spend the best part of 40 minutes inside enemy territory, have 70% of the possession, and remain unable to score a try?

Argentina was able to steal the odd line out by tapping the ball with one hand away from the Aussies, but the Aussies continued to dominate the scrum. The Wallaby number three Taniela Tupou, more like a battle tank than a human was the deciding factor. However, his loose play showed a lack of discipline and control and a tendency to punch anyone near him that was unbecoming of a professional rugby player. One wonders if he was obeying orders, and all this was part of the plan? The Aussie captain kept chirping away at the referees and even got a line out call changed by his insistence. The referee kept asking Michael Hooper if he was satisfied with the referee’s decision, I never heard such a question been directed to the Puma skipper even in English, let alone Spanish!

Three quarters from both sides managed the odd break, the Aussie no 13 Jordan Pataia’s run ended in a defensive penalty but the Pumas managed to get a penalty off their no14’s, run into Aussie territory. Nicolas Sanchez slotted the kick amidst loud boos from the partisan crowd and the Pumas inched ahead 6 – 3 in the 30th minute. This didn’t last too long and in the 33rd minute, Rees Hodge made the ball come back from the left of the posts, using the wind, and gained 3 points from around 38 meters out. Scores level again 6 -6.

So, we had a kicking contest on our hands and the whim and fancy of the referee would dictate the fortunes of the game. In the 38th minute, we saw the aforesaid human tank tight-head prop Taniela Tupou take a swing at Argentina’s most valuable player (this is the sort of thing that makes one wonder and should be analyzed further by world rugby to decide if these are deliberate tactics). Nicolas Sanchez, tiny man that he is succumbed to his Latino temperament and retaliated ( like a fly against a bull) and the wise all-knowing referee decided to reverse the penalty that should have been awarded to Argentina in favor of the Wallabies. Maybe he thought that Sanchez was a tsetse fly and could cause irreparable damage to the bull?!! The resulting touch kick and the line out, saw Aussie winger Korobiete go over the line, but the last pass was blatantly forward and although the referee awarded an on-field try it was overturned by the TV official. Of course, a long advantage was being played and the Aussies got to go back to the spot and try again for touch. The Aussies were desperate for points at this stage and a series of brawls led to an easy penalty being awarded to the more skillful brawlers, the Aussies, mid-left. The gift of three points was accepted and 6 – 9 Aussies in front. At this stage, the Pumas had been warned for excessive foul play and could have a yellow card issued if and when the next offence was so deemed.

This took us into half-time in what can only be reiterated as a brawl in which an oval-shaped white ball was used as a prop of some sort! To call it Rugby Union would be to bring down the wrath of ages upon the sayer. To describe it as a “gripping contest” in which the so much superior Aussie team had been dogged by bad luck and let down by the rub of the green, was the prerogative of the Aussie commentary team. Luckily the mute switch is a feature on modern TV sets!

The Aussies started the second-half with a very deep kick into Puma territory no doubt hoping this created an incident that would trigger the warning that the Argentina team was under. Initially, they got a kickable penalty, but Tom Banks chose to go even deeper into blue and white territory with a touch kick. Lo and behold out came the yellow card and the Argentine Hooker was off for ten minutes in the sin bin. Aussies deep in Argentine territory playing against 14 men. Textbook situation and the stuff of dreams for the “lucky country”! The awarded penalty could have been kicked over even if Reece Hodge had been blindfolded and 6 -11 it was, Wallabies leading.

The Puma skipper who is such an inspirational leader chased down a kick brilliantly and forced a penalty. It was mid-right and around 25 meters out, should have been bread and butter for Sanchez but he missed amidst loud boos and the beginning of a drizzle. We were now in the 46th minute was this going to be the crucial kick? The Wallabies cleared with a massive dropkick that propelled the ball from their 22 into the Argentine 22.

The play progressed with Argentina showing fantastic line speed and an impregnable defence. Another brawl with a penalty reversion this time in favor of the Pumas. At this stage, another skill of the players indulging in this sport which was hard to describe as rugby was displayed. Artistic dives like those employed in soccer to gain penalties, where the player writhes in agony until the penalty is awarded and then recovers miraculously, were employed. The Oscar-winning effort gained a sitter of a penalty for the Wallabies and the score raced ahead to 6 – 15.

With the awarding of a scrum penalty to the Pumas in the 58th minute, we saw a change in the game. Great up and under from Sanchez saw the Pumas go into the Australian 22 but a knock-on saw a scrum with Wallabies having the put in. Another scrum penalty for the Pumas, easily kickable this time saw Sanchez duly oblige 9 – 15. Pumas a goal away from victory.

In the 65th minute, another penalty was awarded to the Pumas. This was around 47 meters away from the posts but dead in front. It was raining now, and the ball was greasy. Would Sanchez kick? He did and brilliantly too, taking the score to 12 – 15. The game was into the 65th minute or so and the Aussie starting halfback Nick White was subbed off. In the 69th minute, the Wallabies were deemed off-side and a penalty awarded on the 50-meter line, slightly left of center. Sanchez stepped up and over she went! Scores level 15 – 15.

At this stage, the inspirational Puma leader and number seven had to go off the field for an HIA. Blatant obstruction by Aussie players who do not bother to make any effort to get onside when one of their players have collected the ball behind them and are running forward, was totally ignored by the match officials but another Puma infringement was spotted and with less than two minutes to go a penalty was awarded to the Wallabies, 40 meters out, mid-left. Bread and butter for Reece Hodge? Easy Mate! Not to be, rugby has some Gods and sometimes they step in to allow fairness to prevail, kick missed, and match drawn.

No one deserved to win that brawl that passed for a game of rugby football and if this is how the game is going to be played in the future, there may not be a future. Certainly, from a spectator’s point of view.

The so-called Rugby Championship tournament is now wide open with all three participating countries level with six points each. Argentina plays the All Blacks next Saturday and the Aussies the Saturday after that. It looks to me that the silverware may have to be shared unless the points of the winning margin are taken into account.