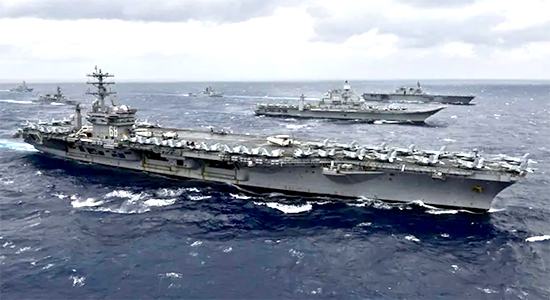 A senior US official has called for the setting up of a new fleet closer to the “crossroads” of the Indian and Pacific Oceans. This is a development with major strategic implications for the US Indo-Pacific policy, its ties with India and with China.

The announcement by the Trump administration official could be seen as the last major foreign and security policy initiatives shaped by it before it gives way to the Biden administration in January.

The statement immediately garnered major attention around the world with analysts seeing it as a reinforcement of the Trump administration’s Indo-Pacific policy. The Indian and the US navies are currently taking part in the Malabar Exercise off Goa in the Arabian Sea along with the Japanese and Australian naval forces.

The remark comes as tensions have risen in the South China Sea, East China Sea and the Taiwan Straits mainly due to aggressive moves by China in the region. Indian and Chinese troops are engaged in an eye-ball-to-eye-ball standoff along their borders in Ladakh.

“We can’t just rely on the Seventh Fleet in Japan,” Kenneth Braithwaite, Secretary of the US Navy said late Tuesday at the Naval Submarine League’s annual symposium. His comments were reported in USNI News, the journal of the US Naval Institute.

“We want to stand up a new numbered fleet,” Braithwaite was quoted as saying. “And we want to put that numbered fleet in the crossroads between the Indian and the Pacific Oceans, and we’re really going to have an Indo-Pacom footprint.”

“We have to look to our other allies and partners like Singapore, like India, and actually put a numbered fleet where it would be extremely relevant if, God forbid, we were to ever get in any kind of a dust-up,” he said.

“More importantly, it can provide a much more formidable deterrence,” he said.

“So we’re going to create the First Fleet …And we’re going to put it, if not Singapore right out of the chocks, we’re going to look to make it more expeditionary-oriented and move it across the Pacific until it is where our allies and partners see that it could best assist them as well as to assist us,” Braithwaite said.

The US official said he would be travelling to India in the coming weeks to discuss security challenges and how the US and Indian navies could help each other.

The US alone could not stand up to China, and nations around the Pacific and around the globe needed to assist in pushing back Beijing militarily and economically if there was a chance for deterrence to work, he said.

Analysts on their part pointed at the “potentially huge” implications of the remarks.

“Trump’s Navy Secretary wants to set up a US Navy 1st Fleet ‘in the crossroads’ between Indian & Pacific Oceans; suggests #Singapore could ultimately be its base. How this plan is developed—or not—under Biden will be interesting to see. Implications are potentially huge,” said Tim Huxley, who heads the Singapore based Asia chapter of the International Institute of Strategic Studies in a Twitter post.

“If the US Navy goes ahead with establishing a 1st Fleet in the IOR, it will reaffirm that Washington continues to view Asia strategy through an ‘Indo-Pacific’ lens—that is, not just focusing on the Western Pacific,” Derek J Grossman, an analyst looking at national security and Indo-Pacific analysis at the Washington based Rand Corporation think-tank said in a Twitter post.