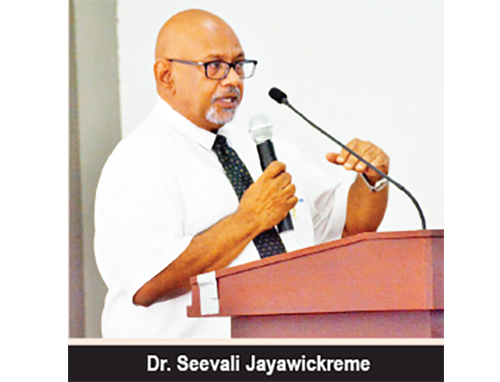 Obtaining the service of a qualified law enforcement officer and joining hands with the Director General of Health Services and the Public Health Inspectors are among strategies that the Sri Lanka Anti Doping Agency is going to employ to fight the use of prohibited drugs in the sports field.

Dr. Seevali Jayawickreme, Director General SLADA expressed these views in an interview with The Island as his agency marked its seventh anniversary on Sunday (15).

There is wide belief that sportsmen both professional and nonprofessional are being introduced to performance enhancing drugs at private gyms but perpetrators often go scot-free for the want of a proper system to monitor unauthorized supplement use.

There have been several high profile athletes who have been found positive for banned substances during the past few years. Though bans and provisional suspensions have been imposed on athletes the real perpetrators have not been brought to justice.

“Up until now no athlete found positive for banned substances has divulged the source from which he or she had obtained the banned substance. For three years we have been trying to fill one of the key posts which had remained vacant in our carder, the post of Director Implementation and Enforcement. There is an Assistant Director post as well. We are going to get the service of a law enforcement officer to fill this post soon. The three ‘I’ s. That is information, inelegance and investigation issues will then be addressed by him.”

Jayawickreme said introducing a study on anti doping to the subject of physical education in schools curricular and vocational institutes was also in the pipeline. “We are having discussions with the National Institute of Education to include a study on anti-doping into the school curriculum. As a first step we are going to propose to include them in the grade 6, 7, 8, 9, 10 and O/L classes. We hope to have them by 2022.”

SLADA’s actions too have been hampered by the Covid 19 pandemic, with the anti doping officials conducting fewer tests this year but Jayawickreme said that his institute had conducted awareness programmes when they were possible.