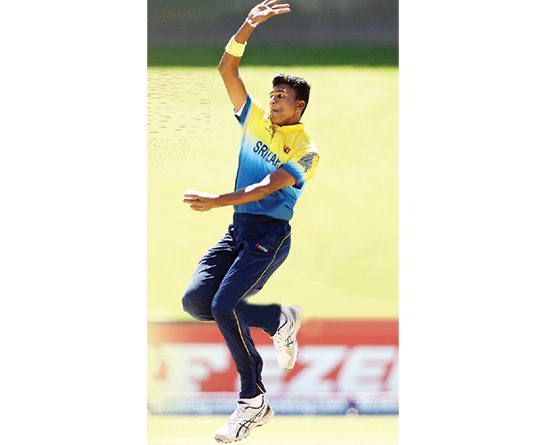 Left-arm quick Dilshan Madushanka has suddenly become the talk in cricket circles after he was drafted into the Sri Lankan squad that will tour South Africa later this year for the Boxing Day and New Year Tests. The 22 players who will go on the tour will begin a week-long residential training camp in Pallekele later this week and all eyes will be on Madushanka.

The 20-year-old hails from the fishing village of Hungama in the Hambantota district. His father is a fisherman and his talent was spotted by former fast bowling great Chaminda Vaas. A couple of years ago, Madushanka had turned up as a net bowler in Hambantota as Sri Lanka were training and Vaas referred him to former Test captain Hashan Tillakaratne, who was the Head Coach of the Under-19 side.

Soon, the youngster was drafted into Sri Lanka Under-19 team and played this year’s ICC Youth World Cup.

Madushanka’s raw pace – clocking over 140 kmph – has impressed all and sundry and so is his smooth action. Then of course left-arm quicks are a rare breed.

All 22 players who will take part in the residential camp and the coaching staff comprising ten individuals went through PCR tests on Wednesday and all reports returned negative.

Sri Lanka are carrying seven extra players to South Africa as they will be not provided net bowlers due to health regulations.

A notable feature in the squad is that Dimuth Karunaratne’s side taking as many as nine seam bowlers.

Dushmantha Chameera, who once was the quickest bowler in Sri Lanka makes a comeback to the side after injury. Chameera and Dasun Shanaka, both of whom hail from Negombo made it to the national team at the same time and Chameera was the most impressive. However, Shanaka has gone onto captain Sri Lanka but Chameera has made little progress due to injuries.

The reason for Sri Lanka to carry that many seam bowlers is that the Tests will be played at Wanderers in Johannesburg and Centurion, a half-hour drive from the South Africa capital. Fast bowlers dominate at both venues and the hosts rarely play a spinner at these venues.