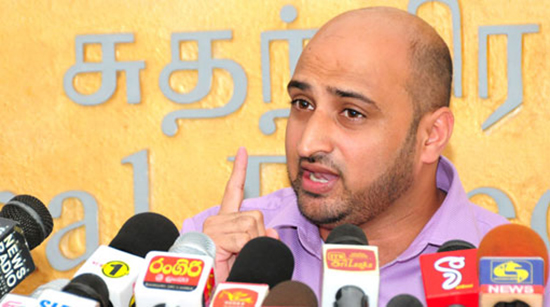 ‘We shouldn’t seek exclusive rights during a grave crisis’

SLPP (Sri Lanka Podujana Peramuna) National List MP Mohammed Muzammil yesterday strongly urged the government not to resume burial of Muslim corona victims under any circumstances, though a section of the Muslim community is demanding that Muslim covid-19 victims be allowed to be buried.

Muzammil, who represents the National Freedom Front (NFF), a constituent of the SLPP, said that the country was struggling to cope with the corona pandemic and no one should be allowed to play politics at a time of national health emergency.

The NFF has five elected MPs and one National List MP in the 145-member SLPP parliamentary group.

In a brief interview with The Island over the phone, the former JVP MP emphasised that whatever the religious dictates and sentiments, the Sri Lankan Muslim community should adhere to specific instructions issued by the government as regards the cremation of corona victims.

Pointing out that the ongoing corona second wave could lead to a an unprecedented catastrophe, Muzammil said the Muslim community had no option but to follow government guidelines. The national economy was already in tatters, as in many other countries, with all major revenue sources such as tourism, garment trade and foreign remittances badly affected, and, therefore any further deterioration of health situation could be disastrous, the MP said.

The government would have to take decisions for the benefit of all people, the MP said, adding that the burial of corona victims was against the health guidelines now in place. Commenting on other Muslim members of parliament pushing for the burial of Muslims dying of COVID-19, Muzammil said that they should be free to express their views. “There is nothing wrong in them taking a stand on this sensitive issue,” the MP said, emphasizing the responsibility on the part of the government to do the right thing.

Muzammil said that he deeply regretted the issue caused by the demand for Muslim burial rights. Responding to another query, the MP pointed out that the Catholic community accepted the government dictates in that regard without causing unnecessary issues.

The MP warned of dire consequences if decision-makers allowed burials at the expense of, what he called the overall health of the country. “Let me explain how burial of bodies could cause a catastrophe. Unlike Catholics, we do not cover a hole dug in the ground to receive the body with sand. Instead, we place some planks and then cover them with sand. This can pose quite a health hazard. Therefore burials shouldn’t be permitted under any circumstances,” Muzammil said.

The MP pointed out how the community could be affected if bodies were released to the families. There could be corona outbreaks all over the place, lawmaker Muzammil said, pointing out how the situation could go out of control.

Responding to another query, Muzammil said that he might earn the wrath of a section of the community for taking a stand contrary to that of their other members of parliament. The lawmaker said that he felt it was his duty to educate the Muslims of the need to follow the government guidelines and also strengthen the government initiatives to contain the rapidly spreading virus.

The MP urged that no one should play politics with the issue at the expense of the country. The country should be told in no uncertain terms that decisions were taken by the government, in consultation with the health authorities, and the military, and it would be the responsibility of all communities to follow specific instructions.

All communities, including the Muslims, should be prepared to give up traditions, and practices, until experts had finalized studies, he said.

“We are still in control of the situation. But, we are certainly not in a position to take a chance. Decisions must be followed to the letter. I also believe Muslims have to be buried. I support that position. But the extraordinary situation on the ground makes my personal stand, on this matter, irrelevant,” MP Muzammil said.

Whatever the politicians say, the vast majority of Lankans realized that the country should follow what was best for all, the NFF representative said.

Muzammil warned that burial of COVID-19 victims could, overnight, cause the rapid deterioration of the situation. Urging the government to be firm on the matter, the MP said: “Please don’t let a few illogical men jeopardize the health of all.”

Muslim burials were done in accordance with Arabian customs which the Sri Lankan Muslim community would have to give up or face the consequences. “We shouldn’t be part of the problem,” the lawmaker said.

Lawmaker Muzammil said that though he wanted to oppose resumption of burials and generally dealt with the issue, he couldn’t get an opportunity to address the parliament when the Corona threat was debated on Oct 23. “The government parliamentary group was allocated 162 minutes. There were 31 speakers, I wasn’t among them.”

Muzammil said that the Muslim community should speak in one voice on this matter.