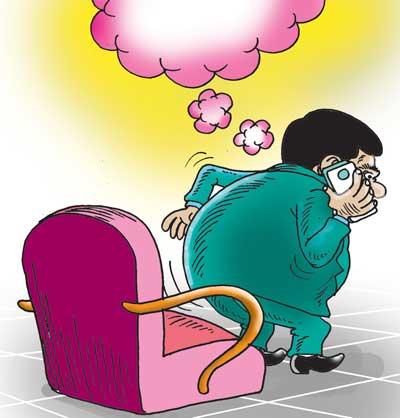 This is also an amusing anecdote related to the 20A. The main character of this story is a learned Diyawanna politico representing a district in the Western province who goes about nattily dressed.

This government Diyawanna politico appeared to be harbouring a grudge against the regime from the very outset.  Some said it was due to his not getting a portfolio he coveted. When the 20A appeared on the scene, he openly took cudgels against it. He even influenced the Buddhist monks who were later up in arms against the 20A, knowledgeable sources say.

Nevertheless, he had promised to vote for the amendment despite his reservations.

However, he had made himself scarce on the vote-taking day. The regime high-ups who had their suspicions, asked Mahi from the upcountry capital to trace and tackle the evasive politico. Mahi later managed to contact the politico on the phone and found out that the man had decided to skip the important event. Then it had occurred to Mahi that the situation called for a change of tactics.

Mahi explained to the politico in graphic detail the rewards that awaited him if he voted for the amendment. Finally, the man agreed to come and vote for the amendment. “But what you promise should materialize today itself,” he had insisted.

Mahi had given his ready assurance. And the once reluctant politico had appeared at the voting time and cast his vote for it!

However, the promised rewards had failed to materialize. Now the politico has realized that he had become an unwitting actor in a drama staged to save a situation, they say.