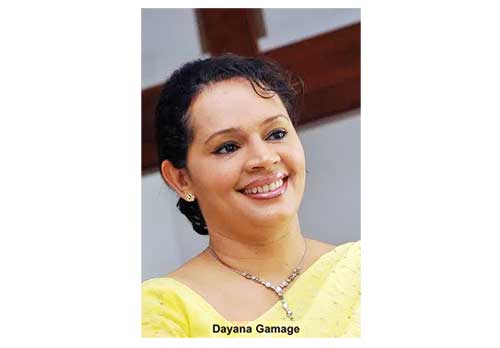 Dissident Samagi Jana Balavegaya (SJB) MP Dayana Gamage yesterday said that she had renounced her British citizenship in 2015 to launch her full time political career here. She insisted that she had obtained an official Sri Lankan passport in her capacity as the Chairperson of Ranminithenna Tele-Cinema village in 2017 during the UNP-led yahapalana administration.

The SJB National List MP said so when she was repeatedly accused of having entered parliament despite being a British national. Chamuditha Samarawickrema yesterday raised, during Salakuna programme on Hiru TV, the contentious issue of a British passport holder being in Parliament.

MP Gamage was among seven NL members appointed on the SJB list. The UNPer is the only newcomer to parliamentary politics.

Repeatedly asked whether she carried two passports, the MP said that she had received a British passport as her mother was British by birth. Responding to another query, Gamage said that as a British passport holder she had obtained a resident visa during 2005-2015 period. According to Gamage, the relinquishment of her British citizenship had enabled her to engage in Sri Lankan politics full-time.

Asked whether she had ever served as private secretary to one-time LTTE Eastern commander Vinayagamurthy Muralitharan aka Karuna Amman, a smiling Gamage told the interviewer he was referring to another woman. “I have nothing to do with Karuna,” Gamage said, strongly denying the accusation that she deliberately refrained from informing relevant authorities here regarding her decision to give up British citizenship.

The interviewer sought an explanation regarding her conduct on the basis of a complaint made by civil society activist Oshala Herath over the alleged use of passports issued by the UK and her gaining entry into parliament in violation of the Constitution, Gamage said that Herath had nothing better to do.

Denying all accusations, the MP recalled how Herath, a candidate at the 2020 general election had made an abortive bid to sabotage the SJB nominations by moving the Supreme Court.

Herath, who served as a member of President Maithripala Sirisena’s media team recently wrote to Director, CID regarding MP Gamage’s citizenship. Herath made available a copy of his complaints to Secretary to the President, AG and Director CID, in addition to the Chairman of the Election Commission.

Herath unsuccessfully contested the last general election on the UNP ticket from the Colombo District.

Asked why she had not obtained dual citizenship, MP Gamage said that she had felt no need to do so. She compared the high profile campaign carried out against her alleging that she was holding British citizenship, as well as her alleged involvement in the project to efforts to deprive SLPP candidate Gotabaya Rajapaksa of the opportunity to contest 2019 presidential election.

MP Gamage strongly defended her right to have voted for the 20th Amendment regardless of a decision taken by the SJB to oppose the new law. “My husband Senaka de Silva informed Mr Premadasa of my decision. I took this decision in consultation with my husband.” The MP dismissed SJB threat to deprive her of NL seat.

MP Gamage said that her husband had made it possible for the rebel UNP group led by the Deputy UNP leader Premadasa to contest the election by handing over his Ape Jathika Peramuna (AJP). The SJB secured 54 seats, including seven on the NL. Pointing out that many political parties had been sold for big amounts over the years, Samarawickrema asked the MP how much her husband had received and whether the NL slot, too, was part of the deal. Denying having received funds for the transferring of the ownership of the party, Gamage claimed that unlike others they had not benefited from that initiative.

“In fact, the NL slot was offered by Mr. Premadasa to my husband, one time Secretary to General Sarath Fonseka when the latter contested the 2010 presidential election as the common candidate.

Responding to another query, MP Gamage revealed that AJP had been registered by Mangala Samaraweera after he was sacked by the UPFA. Declaring that AJP no longer existed, MP Gamage said that both she and her husband handed over their resignation letters as Secretary and Deputy Chairman, respectively, to SJB General Secretary Ranjith Madduma Bandara about a week after she voted for the 20th Amendment.

In a wide ranging interview, MP Gamage revealed that UNP leader Ranil Wickremesinghe had planned to introduce a new piece of legislation similar to the 19th Amendment to the Constitution in case General Sarath Fonseka won the 2010 presidential election. MP Gamage claimed that her husband as the Secretary to the war-winning Army Chief had advised him not to do so as whoever functioned as the President needed necessary executive powers.