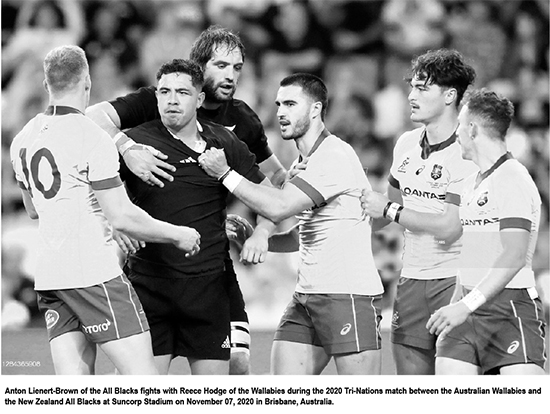 The Bledisloe dead rubber but a game with points for the tri-nations rugby tournament played at Suncorp Stadium, Brisbane. The Wallabies had lost only once at this venue and is there something in a venue that has an outcome on the result?

All blacks had rung in some changes and so had the Wallabies. A humid day in Brisbane and a rather hurried transit to the ground for the Blacks and Nick Berry refereeing a game expected to be an easy win for the NZ team. The Wallaby no1 James Slipper led the team out in his 100th appearance for Australia.

Within two minutes of the kick-off, a nice little chip kick from Reece Hodge playing at no10, combined with a favourable bounce of that ever so fickle rugby ball saw the Wallabies score the first try mid-left. A relatively easy kick was missed by the Aussie no10 and the Wallabies were off to a 5 – 0 lead.

Eight minutes into the game, a desperate attack by the All Blacks with equally resolute defence from the Yellow Jerseys culminated in Ricco Ioane getting over the line from his left-wing. The kick from the extreme left of the posts saw Jordan Barret, who had the kicking duties for the game hit the upright. The kick missed score 5 – 5.

Scott Barret the third of the Barret boys showed great skills in loose play and won the ball and his big brother Beauden made a great touch kick in the 13th minute. However poor positional play by the All Blacks no1 Karl Tu’inukuafe gave away a defensive penalty deep in Wallaby territory.

Around the 20th minute Seevu Reece who was playing on the right-wing and from whom great things were expected, seemed to be trying too hard and got pinged twice in succession for playing the ball when on the ground and gave away penalties, the second of which was mid-left and around 30 meters from the posts. Easily kickable for Hodge and over it went. Wallabies lead 5 – 8.

Then the card game began! Yet another microscopic analysis by the TV ref of a tackle reached a conclusion that the All Black no3 Ofa Tuungafasi while tackling had struck his Wallaby opponent on the point of his jaw with his shoulder. This was simply due to the different heights of the players and obviously had no malicious intent at all. There was plenty of malicious play going on from the Aussies as is their style but the Referees’ got it completely wrong and what should have been a simple penalty or even a yellow card at worst was declared a red card offence! In the 23rd minute of the game, the All Blacks were reduced to 14 players for the rest of the game. A vital lifter in the line out had been summarily dispatched from the game.

A scrum came up in the 28th minute and there was a problem as the no3 had been red-carded! Akira Ioane the elder brother of Ricco ( we had two sets of brother representing NZ in this game – 3 Barrets’ and 2 Ioannes’) who had a strong game had to be benched to get another prop on the field and midfielder Lennert- Brown had to bind at no6 in the scrum. Sam Cane who had been targeted for some foul play by the Aussies, unseen by all the referees, of course, intercepted an Aussie pass from the scrum with great skill that led to a kickable penalty in the 32nd minute. It was around 36 meters out but in front and Jodie Barret was not going to miss that. 8 – 8 scores level.

An almost identical situation that had led to the first red card of the game happened but was totally ignored by the on-field ref. However, the pedantic eye of the TV camera spotted it and the cards that seemed to be burning a hole in the referee’s pocket came out again. Red it was against Australia this time, establishing consistency according to the pundits! Both sides down to 14 players for the rest of the game.

The Customary and obligatory Aboriginal welcome speech at the start of the game saw an Aboriginal elder describe the game as a game of rugby league by mistake. Maybe the Ref was under the impression that there were too many players on the field!

The All Blacks attacked relentlessly and Aussie defence held up. But four penalties in a row inside the 22-meter line saw the card pack being shuffled again and out came a Yellow against the Aussie no11. Seven in a row on another occasion only resulted in penalties. Surely the option of a penalty try is available for so many professional fouls from inside the 22-meter line? The half-time score remained tied at 8 – 8. There were certain commentators describing the game as entertaining but only if you thought it was a brawl of some sort, not a game of Rugby Union!

The referee started the second half by missing a blatant forward pass that had to be pointed out to him by his touch judge. Aussies now had 13 players against the All Blacks 14. Four minutes into this half the Aussies were awarded a kickable penalty, exactly what they wanted with two players short and Reece Hodge made no mistake 8-11 Aussies in front. The 51st minute saw a forwards try off a line out for the All blacks with no2 Codie Taylor managing to ground the ball extreme right. A great conversion by Jodie Barret saw the All Blacks back in the lead 15 -11. In the 54th minutes, the Aussies were looking very threatening, getting the better of the Scrums and of course, engaging in what is now called gamesmanship – taking every opportunity to rough up their opponents and put extreme pressure on the referee. A blatant hand in the scrum was not seen by the referees and the All Blacks thought they got out of jail but it was not to be. A scrum penalty was to follow soon enough, it was around 40 meters out but straight in front and was duly knocked over by Reece Hodge who specializes in this sort of kick. 15 – 14 All Blacks just in front.

Ardie Savea made a few strong runs but the All Blacks forwards were feeling the humidity and showed it by not getting to rucks and mauls in time. Maybe the bench should have been used a little earlier due to the weather? The Linesman or the assistant referee as he is known these days spotted Scott Barret doing what was deemed playing the ball of the ground. What it looked like was a feeble wave of his hand at the Aussie no 9 who then dropped the ball while making a pass.

When the whistle went we all thought it was for a knock-on but lo and behold it was another time to shuffle the cards and a yellow to the youngest of the Barret brothers. So we had two red cards and two yellow cards during this brawl that has been described elsewhere as an “entertaining game of Rugby football”, which it wasn’t!

In the 74th minute, the Wallabies scored mid-left through their substitute prop wearing the no18 jersey. A veritable tank of a man who was totally unstoppable from five meters out. The goal was completed and the score read 15 – 24 All Blacks behind. AB’s were not giving up and in the 78th minute Tupou Vaa’I scored for them under the posts and the resulting kick saw the score move to 22 – 24. Brilliant and desperate defence from Korobiete on the wing for Australia resulted in the All Blacks being unable to score further and the match ended with a 2 point win for the Wallabies who had been trashed just a week ago in Sydney by 37 points.

All in all, it was a tight game but lacked any brilliant passages of play and the antics of the referee left one wondering if we were watching a game of cards or a game of rugby. However, the Aussies played to their strengths, they don’t have the three quarters to match the Kiwis and can not play the open running rugby that we saw in the past two games. However, the Aussies know how to spoil and how to stretch the rules and play the referee. They did this to perfection and got the better of a much superior side. This win will do a lot for Aussie rugby and probably teach the All Blacks never to get complacent against the Aussie battlers.

It is true that the Aussies won the game and it will probably result in some added interest from spectators who were getting tired of watching the Wallabies lose time after time. It may also allow the Wallabies to try and contrive a situation when they can secure the tri-nations trophy, or whatever this latest money-making scheme for the TV networks is called! Whoever won and whoever stands to benefit, it wasn’t the great game of Rugby union!