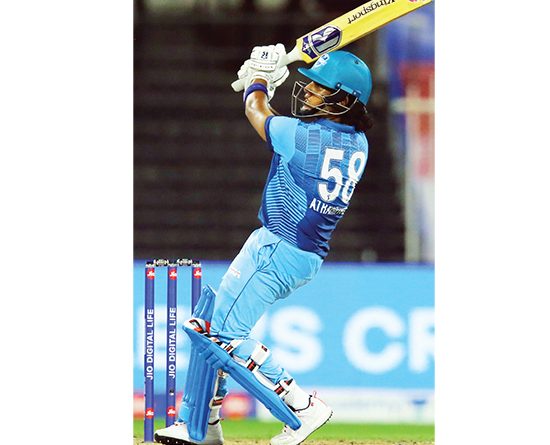 Chamari Atapattu with a brilliant half-century and Radha Yadav, with her nerves of steel while defending 10 runs in the final over, starred in Supernovas’s narrow two-run victory in their must-win league encounter against Trailblazers to put their team in today’s final, against the same opponents.

The Sri Lankan gave Supernovas a flying start with the bat to set them up for a match-winning score of 146. Regular wickets in the middle overs halted the momentum of Trailblazers’ chase. And despite a spirited fightback in the form of a brisk fifty partnership between Deepti Sharma and Harleen Deol to revive their hopes, Radha snatched victory from the jaws of defeat by successfully defending ten off the final over.

What stood out in Supernovas’ flying start was how well Chamari Atapattu – known to prefer pace on the ball – tackled Trailblazers’ spin-heavy attack. The Sri Lankan skipper picked up right from where she left off in the last game, and hammered her maiden fifty of World T-20 Challenge. off just 37 balls. She unleashed the slog sweeps and lofts down the ground to make up for a quiet start to the powerplay, thanks to Jhulan Goswami’s first-two overs with the new-ball that yielded two runs combined.

Atapattu slammed three boundaries and a six off the two overs from Deepti Sharma in the powerplay, forcing Trailblazers to take her off the attack. Supernovas managed 50 without any loss in their first six overs, with Priya Punia’s contribution of only nine. Left-arm spinner Rajeshwari Gayakwad and off-spinner Salma Khatun were treated with similar disdain. While Punia struggled to find the gaps for the better part of her 37-ball stay, Atapattu shouldered the responsibility in the 89-run opening stand. Later, she even afforded Harmanpreet Kaur the time to get her eye in.

Harmanpreet only tagged along as Atapattu kept the assault from her end. However, once the Sri Lankan holed out to long-off, trying to up the ante, her captain stepped up and did it for the team. After working her way to a 19-ball 13, the Supernovas skipper took the attack to Harleen Deol, picking 15 runs off the penultimate over to set Supernovas up for a strong finish. She danced down the track and lofted the third ball over covers for a four and the fifth one well over a leaping Deandra Dottin at long-off, while getting a reprieve off the ball in between those two shots.

They did well to restrict Trailblazers for 144 to earn a hard fought two run win.

In a repeat on Monday, the same two teams will face-off in the final at Sharjah.