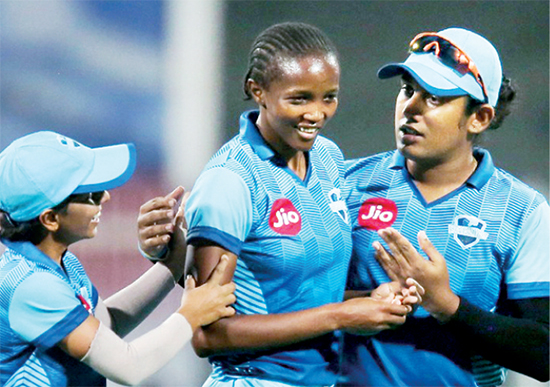 Sri Lankan opening batter Chamari Atapattu starred with the bat for the Supernovas in the opening game of the Women’s T20 Challenge at Sharjah, but it wasn’t enough as the Velocity made a dramatic comeback late in the match to pull off a thrilling win with one ball to spare.

The Supernovas started off tamely after they were asked to bat first and their run rate was well below six runs per over at the half way stage of their innings. But the experienced duo of Atapattu and skipper Harmanpreet Kaur upped the ante in the second half of the innings before Atapattu fell for 44 which included two sixes and two fours. She was also the top scorer in the Supernovas innings.

Kaur held the innings together before she was dismissed for 31 in the 17th over before things went downhill for the Supernovas as they managed just 15 runs in the last 3.2 overs to end up with 126/8 in their allotted 20 overs.

The only other Sri Lankan involved in the tournament, former skipper Shashikala Siriwardene also chipped in with a useful 18 towards the latter part of the innings, while she was also expected to play a larger role with the ball for the Supernovas.

Siriwardene accounted for the big scalp of Indian batter Mithali Raj in the Supernovas defense of 126, as Velocity were staring down the barrel at 65/4 after 13 overs.

But a breathtaking partnership of 51 runs off 35 balls between South African Sune Luus(37*) and Sushma Verma(34) got Velocity back in the match, when Siriwardene was asked to bowl the final over with nine runs to get.

Luus managed to hold her nerve and struck two boundaries in the final over to take Velocity home by 5 wickets with one ball to spare.