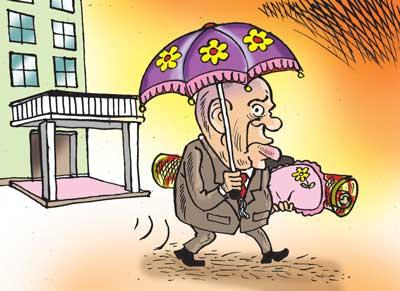 The lady purohita’s alleged request for an umbrella and several other items for official use triggered a storm in social media recently. It was mostly negative publicity and it drew a sharp response from her clarifying the matter.

Meanwhile, some developments related to this affair ensued unknown to the general public. For instance, the Ministry’s top executive had been suddenly transferred to the ‘pool’. A senior administrator, this top executive had gained the high office after serving in a number of high positions at the periphery.
What was intriguing was that it was another party who was involved in making the request and justifying it. And the top executive is said to have had nothing to do with the affair, they say.
By the way, the top executive has reportedly decided to go home rather than cool his heels in the ‘pool’. Meanwhile, the government high-ups are said to be trying to take some damage control measures.