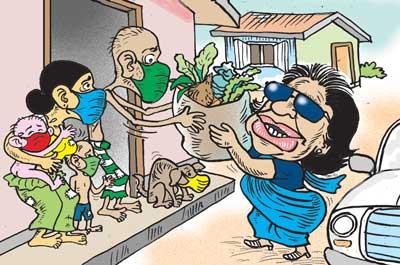 The coronavirus pandemic raging in Siyane Korale is causing the people there unprecedented misery and suffering. Those who had already been leading a hand to mouth existence are facing starvation, they say.

People in some areas in Korale have not even received the Rs. 5,000 dole distributed recently. What had caused the people much distress is that none of the new representatives they had elected – not even the good ‘doctor’ had visited them in their hour of need.  However, a silver lining in the dark cloud for them has appeared: the former Madam who, they had thought, had forgotten them has appeared on the scene! She is reportedly going round the area distributing packs of essential consumer goods.

Now the people in Siyane Korale have started speaking good of the former Madam who, they say, failed to show this much of concern for them even when she was the head of government.