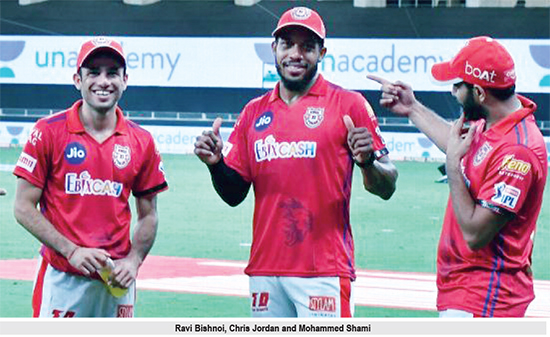 The Kolkata Knight Riders thumped the Delhi Capitals earlier on Saturday to consolidate their fourth spot and establish a four-point lead over the Sunrisers Hyderabad and the Kings XI Punjab. In the Sunrisers’ previous game against the Rajasthan Royals, the middle order bailed them out after both David Warner and Jonny Bairstow fell cheaply. However, they unravelled spectacularly on Saturday as the Kings XI pulled off an unlikely heist. Here’s how it unfolded

In pursuit of a modest target of 127, the “old-school” Warner turns up and takes on the Kings XI’s gun bowler Mohammed Shami. The Sunrisers’ captain lofts Shami over cover for six, then flat-bats him over his head and pulls him past mid-on for fours. All up, Warner scores 22 runs off 13 balls from Shami. The Sunrisers are 52 for 0 in six overs.

Enter Ravi Bishnoi. Exit Warner. Having reverse-swept a googly for four first ball, Warner aims another reverse-sweep off the second, but Bishnoi finds more turn and bounce. The ball flicks Warner’s glove and Rahul hangs on to a catch. Paul Reiffel, the on-field umpire, though shoots down the appeal, which Rahul reviews successfully to overturn the on-field not-out decision. Warner gone for a rapid 35.

M Ashwin had harried Bairstow with googlies in his first two overs. Ashwin, like fellow legspinner Bishnoi, relishes bowling the googly more than the legbreak. It was the same variation that impressed Stephen Fleming and MS Dhoni so much that they shelled out INR 4.5 crore in the 2016 auction to get him on board at the Rising Pune Supergiant.

In the past couple of seasons, Ashwin has got the googly to skid off the pitch. Bairstow is ready for the googly in Ashwin’s third over. He shapes to sweep with the break through square leg. However, Ashwin gets a legbreak to drift into Bairstow and bowls him around his legs.

Manish Pandey is taking his time to settle as the Dubai pitch is slowing down. Abdul Samad is promoted to No.4 to perhaps target the bowlers and shorter boundaries. Or perhaps the Sunrisers just don’t want to risk Vijay Shankar, who had hurt his thumb in the field, in a small chase. Shankar had suffered back spasms earlier in the tournament as well.

Rahul searches for another breakthrough and brings back Shami. The Kings XI’s main bowler will finish his quota by the ninth over. Another batsman may have opted to see Shami off, but Samad is a six-hitter, and that’s why he has been picked ahead of Abhishek Sharma.

Shami pitches it right in the slot, but Samad doesn’t quite get underneath the length and feebly chips it to mid-off, where Chris Jordan pouches the overhead catch. The Kings XI start to believe.

Pandey and Shankar threaten to close out a second successive chase. They work past the early blows by dropping the ball into the gaps. Pandey, in particular, struggles to read Bishnoi’s googly and so once Jordan comes back, he looks to chance his arm. He swishes at a leg-side full-toss and misses.

Jordan then shifts his line outside off, but overpitches it. Pandey, like Samad, doesn’t quite get under it, and chips it in the air. J Suchith, the sub fielder, tears across to his right, and plucks a catch out of thin air in front of the Kings XI dugout.

In the 2017 IPL final, Suchith had ran out Washington Sundar off the last ball as a sub fielder to seal a one-run win for the Mumbai Indians. Pandey’s grab will turn out to be a match-winning fielding effort as well.

All of the Sunrisers’ hopes are on Shankar. He had lined up his Tamil Nadu team-mate Ashwin and driven him straight for a brace of fours. Then, there was a languid lofted drive over mid-off for four off Jordan. After that boundary, the Sunrisers need only 20 off 18 balls. At that stage, ESPNcricinfo’s forecaster pegged Kings XI’s chances at a mere 5.47%.

Jason Holder jabs Arshdeep Singh to point and Shankar responds for the single, taking on Nicholas Pooran’s arm. Pooran misses the stumps, but Shankar cops a nasty blow on the grille of his helmet as the ball skids off the turf and bounces extra. After the Sunrisers’ medical staff tend to Shankar, he composes himself and signals that he’s ready to bat on.

Shankar wants to finish back-to-back games for the Sunrisers. He expects a short delivery and ventures leg side, hoping to manipulate the gap between backward point and short third man. Singh keeps it short, but it’s an off-pace cutter that grips and has Shankar edging behind to Rahul.

It comes down to the Sunrisers

Jordan v Holder. The Kings XI’s seniors Rahul, Chris Gayle, Glenn Maxwell, and Pooran are all part of an intense discussion with Jordan. He will be bowling into Big Jase from over the wicket, with the leg-side boundary being the shorter one. Arshdeep will have the cushion of bowling of the last over, with the leg-side boundary being the bigger one.

Jordan brings him with him the reputation of being a bonafide death bowler for England, but he hasn’t quite had his IPL moment. That Super Over against the Mumbai Indians could’ve gone awry for him if not for Mayank Agarwal’s stunning save at the boundary.

Agarwal is out injured now, but Jordan has a chance to stamp his authority on the IPL. His first ball is a middle-stump yorker and Holder stabs it down to long-on for one. Priyam Garg squeezes a single off the second to bring Holder back on strike. Jordan’s plan is simple: hide the ball away from Holder’s reach and deny him access to the shorter leg-side fence. Jordan executes his plan and has Holder carving a catch to Mandeep Singh at extra-cover.

Mandeep had lost his father on Friday evening, but here he is stepping up under pressure for the Kings XI.

The Sunrisers need 15 off nine balls. They need more magic from Rashid Khan after he had ripped out Rahul with a perfect wrong’un earlier in the evening. Jordan goes wide of off once again, and Khan only scythes it straight to Pooran at sweeper cover for a golden duck. Double-wicket penultimate over. Four years after having been yanked out of Sky Sports’ panel of IPL analysts as a late replacement for the Royal Challengers Bangalore, Jordan has his IPL moment. It’s panic stations for the Sunrisers.

Arshdeep has 13 to defend to pull off a coup. He has only played three first-class and 18 white-ball games for Punjab in domestic cricket. He is up against Sandeep Sharma, his senior state mate, who is Sunrisers’ swing bowler in the IPL. Sunrisers need him to swing with the bat now. Arshdeep, however, digs in an offcutter and has Sharma splicing a pull to midwicket.

Garg has crossed over and the Sunrisers need 13 off four balls. He’s probably wondering how it came down to this? Arshdeep digs in another cutter at off stump and dares Garg to manufacture pace for himself. However, the batsman is cramped for room and only drags it to long-on, where Jordan runs in, dives forward, and snaps up another smart catch.

With the game up, Arshdeep gets another cutter to stick in the pitch, drawing a weak push from No.11 Khaleel Ahmed to point. Ahmed simply dawdles for the single and is emphatically beaten by a direct hit from Bishnoi. It raises his coach Anil Kumble off his seat and even has him applauding animatedly.

From having lost games from seemingly winning positions, the Kings XI pulled off a great escape to secure their fourth victory in a row, boosting their playoffs chances. As for the Sunrisers, they’re still not out yet, but how will they recover from such a cataclysmic collapse?