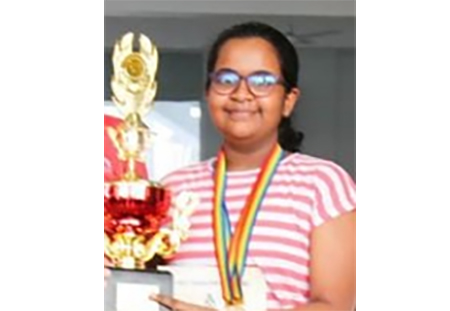 Wycherley International School’s Ashvini Pavalachandran and Tharushi Niklesha of Visakha Vidyalaya scored consecutive wins to help Sri Lanka advance to the best eight round of the Asian Nations Women’s Cup 2020 Online Chess Championship. Their victories helped the country secure a crucial win (against Australia) and a draw (against Singapore) in the last two rounds.

Sri Lanka were ranked 11th in the 31 team competition after the seventh round and needed a position in the first eight in the ranking list if they were to advance to the next stage which will be held on Friday.

They were given new life by Tharushi Sandeepani, Pavalachandran Ashvini and Tharushi Niklesha in the eighth round as they edged out their Australian counterparts to climb up to the eighth position in the ranking list.

Ashvini and Niklesha then earned points in their games against Liu Yang Hazel and Fang Kun respectively of Singapore to further improve Sri Lanka’s ranking(7th).

The duo also earned half a point each in the seventh round where Women’s International Master Sachini Ranasinghe won a point against her Kyrgyzstan opponent.

Sri Lanka had a disastrous start as they lost 4-0 against Kazakhstan in the first round. However Kazakhstan failed to reach the business end of the championship after being ranked tenth.

They bounced back in the second round when Nethmi Fernando, Ashvini and Niklesha scored points to beat Kuwait 4-0. The third round saw Tharushi Sandeepani and Sachini Ranasinghe scoring points to draw level against Bangladesh (2-2).

Ashvini was the sole winner for Sri Lanka in the contest against Lebanon in the fourth round.

In the fifth round Ashvini, Ranasinghe, Niklesha and Tharushi Fernando won against Palestine while Tharushi Sandeepani, Ashvini and Ranasinghe won a point each in the sixth round. Niklesha also earned a half a point in that round.

India, Philippines, Iran, Vietnam, Mongolia, Indonesia, Sri Lanka and Kyrgyzstan were the top ranked teams after nine rounds. The quarter-final round will commence on Friday.

Meanwhile Sri Lanka men’s team were eliminated after their nine rounds as they were ranked 18th.