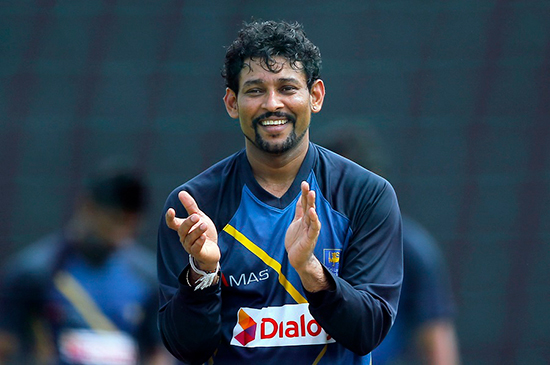 A reporter once informed T.M. Dilshan that the scoop shot had brought about his downfall umpteen times and he should reconsider playing it frequently. Dilshan said that there is a 90 percent chance of him scoring a boundary off the shot and a ten percent chance of getting dismissed. He added that he would trust his instincts and play the stroke first ball in the next game if it was in the zone. True to form he did it. The reporter never gave Dilshan batting tips after that Dilshan turned 44 yesterday and many anecdotes relating to him were recalled on social media.

Four Sri Lankans have scored more than 10,000 runs in ODI cricket. The usual suspects are Kumar Sangakkara, Sanath Jayasuriya and Mahela Jayawardene, people hardly remember Dilshan’s name. It has been a case throughout his career. He always lived in the shadows of Mahela and Sanga. But make no mistake. He was a vital cog in the Sri Lankan wheel for more than a decade and mighty effective too.

There is nothing in cricket that he could not do. He was a prominent figure in the middle order filling in the big shoes of Arjuna Ranatunga. Then the selectors asked him to move up the order as Sanath Jayasuriya was set to bring the curtain down on his remarkable career. How did he fill these shoes? Effortless.

Dilshan played his last game for Sri Lanka two months before his 40th birthday. Even at that stage he was the team’s best fielder – by a country mile. The selectors were at ease when Dilshan was in the side as they could be flexible and experiment. He could keep wickets. He could bowl ten overs of tidy off-spin. There was nothing in the game of cricket that was impossible for him. He was a Jack of all trade and a master of them too.

Dilshan was the Hobson’s choice for captaincy in 2011. A tour of England was his first assignment. He faced many challenges. The team’s premier fast bowler retired hastily. The players arrived in England in different batches giving priority to their IPL commitments and Sri Lanka looked a team in disarray. True to form they were blown away for 82 runs in the opening Test in Cardiff to lose by an innings. It was time for Dilshan to lead from the front. He surely did in the next Test posting a career best 193 at Lord’s and in the process broke Sidath Wettimuny’s record for the highest individual score at the Home of Cricket by a Sri Lankan – a record that had stood for more than a quarter century. Ironically, it was Wettimuny who had picked Dilshan from total oblivion in 1999.

The rumblings continued. Despite the setbacks Sri Lanka won their maiden Test match in South Africa when they overcame the Proteas in Durban. Dilshan’s leadership skills should have been celebrated. Yet, he was sacked unceremoniously at the end of the tour. The then President of Sri Lanka Cricket had conspired with a senior player to remove Dilshan after the tour come what may. It was a deal, sealed at Perera Gardens.

You tend to get the feeling that some seniors were disruptive elements during Dilshan’s captaincy. Dilshan captained the side in nine Tests away from home. There was one particular senior who did not make a single half-century in those nine games. Yet, he shamelessly took up the captaincy when Dilshan was sacked.

Next up Australia. If someone did something wrong to you, you would naturally want to give them a taste of their own medicine? Not Dilshan. He came off with flying colours in Australia in the tri-nation competition finishing as the highest run getter of the tournament. Mind you this was the very next series after he had been sacked as skipper. His 513 was more than that of David Warner (506), Virat Kohli (373) et al. So next time you hear rumours questioning Dilshan’s honesty do keep in mind that Perera Gardens and not Maitland Place used to run our cricket a decade ago.