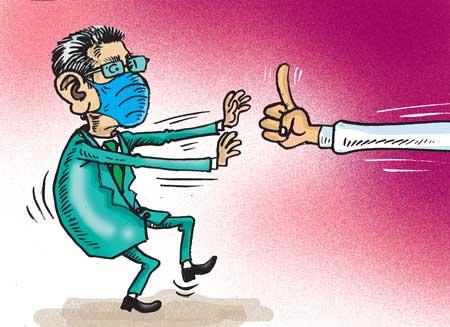 A high-level special meeting of the Blue party was held the other day. It had been convened to discuss the party’s stand on the 20th Amendment.

Among the political stalwarts present at this meeting, there was a President’s Counsel who, by the way, had held high positions in the Diyawanna council.

A Blue senior known to be a radical who is said to be ruining the day they threw in their lot with the present regime, had planned to use the legal expert as a cat’s paw in a ‘game’ he had planned.

The party senior had told him: “Now that you are not in the council and therefore, you are not bound to support the Amendment. Why don’t you express your independent opinion?”

The legal expert looked a little bemused but offered no reply. The party senior again pressed his point: “Why can’t you express your independent view? What you say will carry greater weight than what we say!”

When the party senior continued to press the legal expert, he finally opened up. “What independent opinion…?” he demanded in a raised tone. “I am for the Amendment…!”