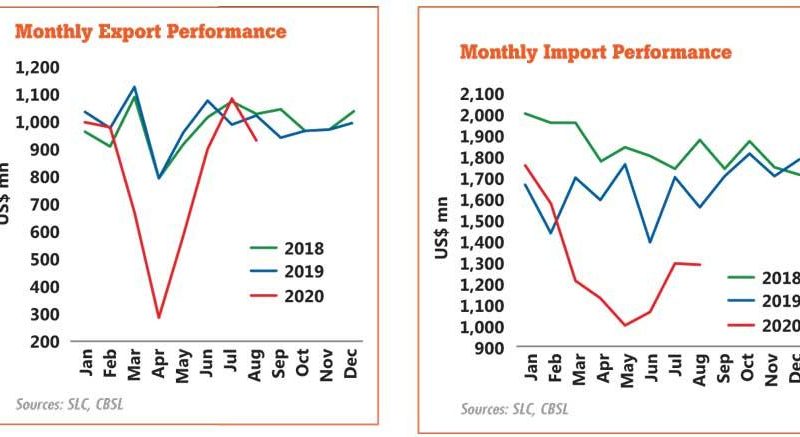 Sri Lanka’s trade deficit continued to narrow as imports continued to decline at a faster pace than the decline in export earnings in the month of August, the latest external sector data released by the Central
Bank showed.

The deficit in the trade account in August 2020 narrowed to US$ 342 million from US$ 541 million in August 2019, as imports declined at a faster pace than the decline in exports.

Also, on a cumulative basis, the trade deficit narrowed by over US$ 1 billion to US$ 3,812 million during the period from January to August 2020 from US$ 4,855 million in the corresponding period of 2019.

The major contributory factors for the decline in trade deficit were, lower imports of fuel, textiles, building materials, machinery & equipment and personal vehicles.

The government has placed regulatory restrictions on goods identified as non-essential imports to preserve the country’s foreign reserves and the currency. The government expects the trade account deficit to narrow to US$ 5.8 billion this year from US$ 8 billion in 2019.

Meanwhile, merchandise export performance remained strong in August, although down from year-on-year (YoY) and month-on-month basis.

The YoY decline emanated from declines recorded in earnings from all three major categories of exports namely, industrial, agricultural, and mineral exports.

Industrial exports declined by 10.2 percent, YoY in August 2020 mainly due to reduced earnings from exports related to textiles and garments, petroleum products, gems, diamonds and jewellery, leather, travel goods and footwear and base metals and articles.

Earnings from textiles and garments declined by 11.9 percent YoY to US$ 440 million in August 2020, led by lower garments exports to the USA and EU.

However, a notable increase was recorded in earnings from personal protective equipment (PPE) such as facemasks and protective suits, which are categorised under other made up articles.

Meanwhile, continuing the YoY declining trend observed since March 2020, merchandise imports recorded a decline of 18.1 percent to US$ 1,289 million in August 2020. The continuation of measures taken by the government to restrict the importation of selected non-essential goods and lower fuel prices in the international market primarily caused this decline.

Meanwhile, workers’ remittances recorded a notable increase for the third consecutive month, recording a growth of 28.2 percent YoY in August 2020 to US$ 664 million. This increase helped limit the cumulative decline in workers’ remittances to 1.5 percent to US$ 4,346 million during the period from January to August 2020, in comparison to the corresponding period of 2019.