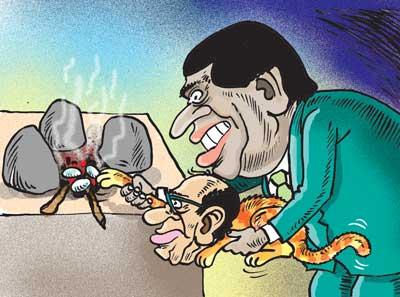 The Green heavyweight from the city who is known to have coveted the deputy post in the party is a disappointed man these days, they say.

There is an interesting story behind how his plans had gone awry.

To all intents and purposes, he appeared from the very outset as a loyalist of the Green chief, but the latter had lost faith in him on learning that he had planned at the height of the party crisis to switch the party leadership to the former Diyawanna chair.

Of course, he had not laid his plan out of any love for the former Diyawanna chair, but only as a stepping stone to the leadership itself eventually. When his plan leaked out, even some stalwarts sympathetic towards him had let him down at the decisive hour.

However, the city heavyweight is not a man who would easily give up and he is said to be busy planning behind the scene to stage a comeback.