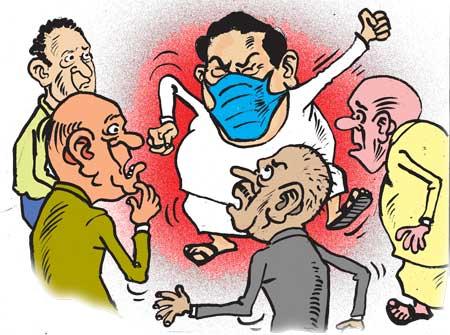 This party senior, a versatile politico is a top team member even today.

In fact, he was a top team member in several successive regimes – those of Chandrika, Mahinda and yahapalanaya.

He has now been assigned a subject which enables him to render a great service to the country. However, he has found the subject ‘a dry one’. Besides, he considers that it is poor with regard to funds and projects. A big fund that had once come under the subject has now been transferred to the general treasury, they say.

The politico who is used to be in charge of ‘rewarding’ subjects, is said to be very unhappy about his present lot.

He is said to be so disgusted that the mere mention of the name of a regime bigwig would provoke him, they say.

The name of this politico who has been in politics for 20 to 30 years was once proposed for a very high post, but the move went haywire at the eleventh hour.

His constant laments which are not at all complimentary to regime high-ups, have already been reported to the highest authorities by the intelligence sleuths and the latter are now closely monitoring his moves, they say.