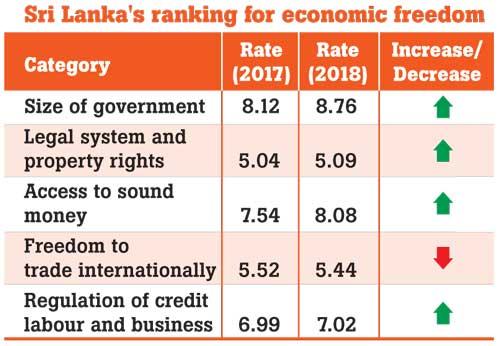 Sri Lanka has been placed 83 among 162 jurisdictions on the Economic Freedom of the World Index, a position the island nation secured by advancing 15 places over the last year.

However, the ‘Economic Freedom of the World: 2020 Annual Report’ released by Canada’s Fraser Institute in association with the Advocata Institute Sri Lanka, stated that the island nation would have been placed at a lower rank and given a smaller score if the data were based on 2018, 2019, and 2020, instead of being based only on 2018 data.

The ranking is based on the five categories—size of government; legal system and property rights; sound money; freedom to trade internationally and regulation.

“During this period, the size of government increased, freedom to trade did not improve with para-tariffs still in place while regulations were not clearly defined.  With COVID-19 pandemic coming into Sri Lanka in March 2019, economic freedom had to be curtailed with a complete lockdown of activities. But this was a precautionary strategy,” Advocata Institute Chair of the Academic Programme, Dr. Sarath Rajapatirana said.

Pointing out that without a lockdown it could have been worse for the country, he added that Sri Lanka did better than most countries. “The danger is that the measures adopted could be retained, which would restrain economic freedom beyond what was necessary to restrain the virus,” he went on to say.

The report revealed that Sri Lanka is particularly weak in the category related to ‘Legal System and Property rights’ in the index with little improvement from last year’s report.

According to University of Colombo Head of Economics and Advisor to Advocata Institute, Professor Sirimal Abeyratne, economic freedom requires discipline and discipline is constituted by the rule of law.

Moreover, the average income of the poorest 10 percent in the top quartile was US$ 12,293 compared to US$ 1,558 in the bottom quartile.