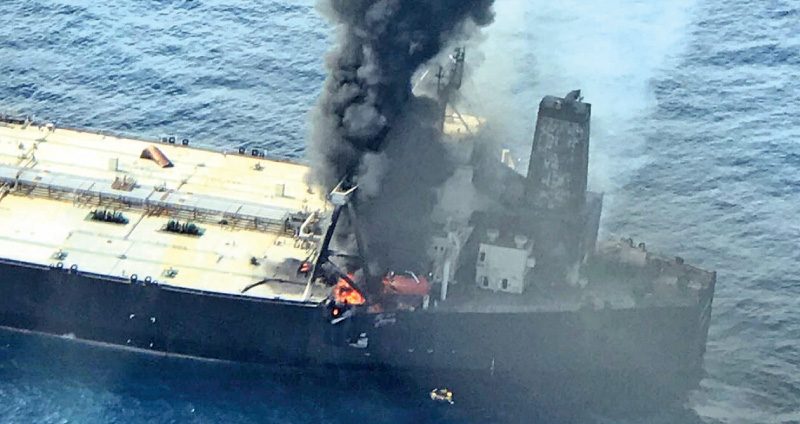 Twenty two crew members out of 23 on board an ill-fated oil tanker chartered by Indian Oil Corp (IOC) which caught fire 38 nautical miles off the Sangamankanda coast have been rescued.

Navy Spokesman Captain Indika De Silva said one crew member was reported missing. The Indian vessel New Diamond, which is a Very Large Crude Carrier (VLCC), was heading to the port of Paradip in India. It had sailed from Mina-Al-Ahmadi in Kuwait.The fire had erupted in the engine room of the vessel and was raging by last evening. An injured seaman aboard the crude oil tanker was rescued by the Sri Lanka Navy and brought ashore, said the Navy Spokesman.

The remaining 19 members of the crew have been rescued by a passing merchant vessel and are being accommodated aboard the ship, the Navy said.

The Navy had rescued three of the crew members aboard the ill-fated vessel.

The Navy deployed three vessels to assist the distressed tanker to rescue injured Seamen aboard. The Air Force also dispatched a surveillance aircraft to monitor the vessel and to assess the damage. The Indian Coast Guard said that it diverted ‘Shaurya, Sarang, and Samudra Paheredar’ ships and Dornier aircraft as immediate fire fighting assistance was sought by the Navy. Two Russian Navy ships also joined the rescue operation.

A Marine Environment Protection Authority (MEPA) spokesman said it was on high alert over the possibility of an oil spill since the fire had happened in the engine room below. The fire had begun around 7.45 am and the cause of the fire was suspected to be an engine fault.The vessel was built in 2000. The distressed Panamanian registered tanker sen 38 nautical miles off Sangamankanda point captured by the Sri Lanka Air Force hovercraft.

Based on the most recent update shared by ICG at about 5 pm, ICG ships Shaurya, Sarang, Samudra Paheredar and Dornier aircraft were carrying out the operation. Meanwhile Spokesperson of the Indian Navy in a tweet said that the special operation to douse the fire on board the ship and execute search and rescue operations was successfully carried out with the assistance of the Sri Lankan Navy and the Air Force.ac

Meanwhile, two Russian war ships which had anchored at the Hambantota Harbour for fuelling also rushed to assist in dousing the fire on board the Indian oil tanker.

The Sri Lanka Air Force had deployed a Beech King 200 aircraft and Mi-17 helicopter for assistance while the Sri Lanka Navy had deployed three vessels. The Navy said the Panamanian registered tanker was 38 nautical miles off Sangamankanda point and it carried around 270,000 metric tonnes of crude oil at the time of the accident. The tanker was heading to India.