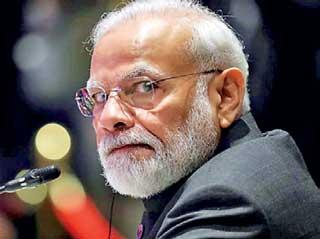 The contraction was the biggest since New Delhi started publishing quarterly statistics in 1996, and the latest figures came as the country’s coronavirus cases surged past 3.6 million.

The steep dip in Asia’s third-largest economy reflected the impact of a months-long nationwide shutdown that saw most industrial and manufacturing activity grind to a halt.

The virus restrictions dealt a severe blow to an economy already struggling with a protracted slowdown through 2019, hit by the twin shocks of shrinking consumer demand and rising
unemployment levels.

The decline was worse than expected, with a survey of economists by Bloomberg earlier predicting a contraction of 18 percent.

On Monday the government warned the figures could be revised further since the pandemic had also affected the ability to collect accurate data on economic activity.

“The entire quarter was spent in lockdown and it was a complete washout for the Indian economy,” Mumbai-based economist Ashutosh Datar told AFP.

He added that the economic gloom was unlikely to lift “for the next few quarters”.

“We started publishing quarterly growth figures only from 1996 and this is the worst quarterly performance on record ever since,” he said.

The sudden shutdown from late March prompted a huge exodus by millions of migrant workers who fled cities for their villages due to a lack of food and money.

Many have yet to return even as restrictions have eased, leaving factories struggling with labour shortages.
“This is a health crisis that has metamorphosed into an economic crisis,” State Bank of Baroda chief economist Sameer Narang told AFP.

“Manufacturing, trade, construction, transport and communication have all suffered.”

With the exception of agriculture, which registered modest growth, every other sector showed sharp losses. Construction activity was halved, while manufacturing plummeted by nearly 40 percent compared to the previous year.

Daily wage earners and small business owners were hit particularly hard, with Mumbai-based shopkeeper Himanshu Patel saying he dipped into his savings for months to keep his
store afloat. “This has been the worst period of business we have ever seen in our lives so far,” the 43-year-old said.

Prime Minister Narendra Modi had announced a $266 billion package — 10 percent of the country’s GDP — to revive the battered economy, while India’s central bank has slashed interest rates and transferred billions of rupees in annual dividends to the government.

But the measures have yet to yield any positive economic impact or spur a pick-up in demand, while inflation has jumped to over six percent — far above the bank’s target range of four percent.

Rising inflation and unemployment have sharply hit demand, analysts said, underlining the need for the government to act quickly to jumpstart the economy. “We have ample reasons to be pessimistic about demand as there is a huge job and income loss so demand will not (return) rapidly,” said SujanHajra, a Mumbai-based economist with Anand Rathi securities.

“The Modi government has to come forward with some form of fiscal stimulus urgently to help economic recovery.”
Opposition leader and former finance minister P. Chidambaram criticised the government for “doing nothing, literally nothing, to cushion the fall by taking suitable fiscal and welfare measures”.

“We had warned the government and urged the government to take preventive and preemptive measures. Our pleas fell on deaf ears. The country, as a whole, is paying a heavy price”, he said in an online press briefing. “The inaction and ineptitude of the government gives us no hope that we will see light at the end of the tunnel at any
time soon.”

As the economy has contracted, coronavirus infections have hit new records across the country. India on Monday reached almost 65,000 virus deaths, overtaking Mexico with the world’s third-highest toll behind the United States and Brazil. The nation of 1.3 billion also has the third-highest number of
infections worldwide.

The lockdown has failed to contain the spread of the disease which has travelled from crowded cities to remote villages where access to healthcare remains a
huge issue.