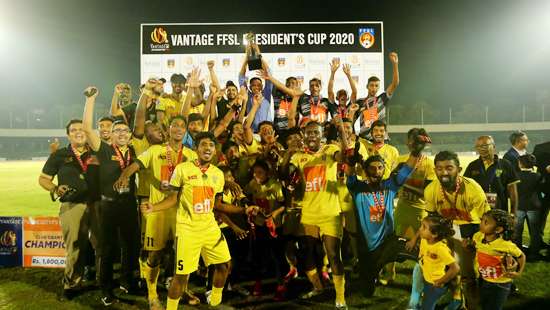 Colombo FC basked in glory as they routed Blue Eagles SC 4-0 to emerge champions in the Vantage FFSL President’s Cup 2020 tournament in a one-sided final played under lights at Sugathadasa Stadium.

After enjoying a slender 1-0 lead at half time, Colombo FC completely dominated the second session tactically outplaying the Blue Eagles by stepping up the tempo’s winning the aerial battle and acclimatizing better to the wet conditions underfoot.

Ahmed Shazny was Colombo FC’s hero scoring a brace either side of the interval including the opening goal in the 31st minute. The match was played at a fast and furious pace from the opening whistle though the ball was more seen in flight than being passed on the ground. Blue Eagles pressed hard for the equaliser but were denied by the Colombo FC custodian Imran Nazeer.

“We gave a good fight. We tried hard to get the equaliser but were unlucky. I have complete faith in my team though they made a few mistakes. We were outplayed in the second half and the better team on the day won,” a disappointed Colombo FC skipper LakmalGunasinghe said after the match.

“I was confident that we would win and avenge the 2-0 loss in the group match,” said  winnig Colombo FC skipper ChamithRathnayake. “We were in control throughout the match. Shazny has scored many goals for us and rose to the occasion in the final as well.” Blue Eagles seemed deflated after FuricMomas chested the ball and volleyed home a cross in the second half. Shazny scored from close range in 82nd minute while ShabeerRazooniya put the icing on the cake by pouncing on a defensive lapse and curling his shot in the far corner of the net shortly before added time.

Colombo FC’s Mohamed Fazal was adjudged the Most Valuable Player of the Final while New Youngs FC, Wennappuwa  received the Fairplay award.

Former FFSL president Rear Admiral (Rtd) SarathWeerasekara, the State Minister of Provincial Councils and Local Government, was the chief guest and gave away the trophy to the champions Colombo FC who also received Rs. 300,000 as prize money.

This is the first major football competition to be held in South Asia after the coronavirus outbreak with the participation of 20 leading clubs in the country.

The tournament was played behind closed doors with limited fans being allowed into the stadium following strict health regulations because of the coronavirus.