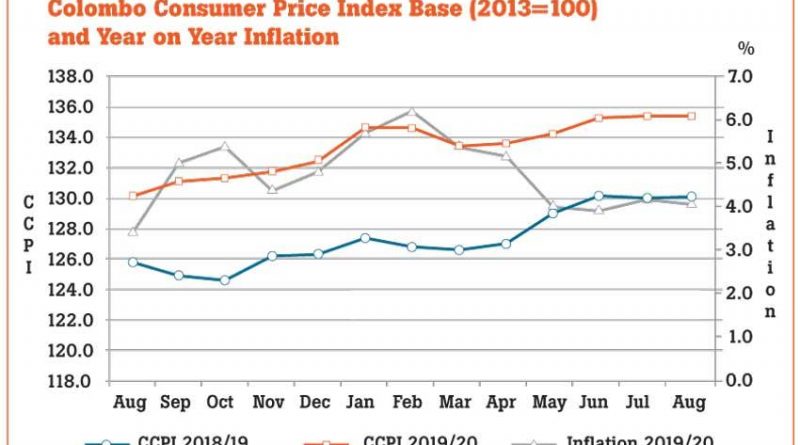 Consumer prices in the mostly urban Colombo district decelerated in August from July as non-food prices eased, while the prices of the food basket continued its ascent.

The consumer prices measured based on the Colombo Consumer Price Index (CCPI) rose 4.1 percent during the twelve months to August, decelerating from 4.2 percent in July. July prices mainly rose due to non-food items such as healthcare, clothing and transport as people mostly returned to their normal routine as the coronavirus
fears dissipated.

However, in August, money spent on healthcare fell substantially, particularly payments made on medical laboratories, bringing down the entire index. Urbanites typically spend heavily on healthcare compared to people in rural areas. As a result, the non-food inflation contracted by 0.2 percent in August from July, while on year-on-year basis, the prices rose at a lower rate of 0.8 percent, from 1.5 percent increase in July.

However, a closer analysis of the subcategories showed that people have resumed and increased their visits to restaurants and hotels after those establishments re-started welcoming guests following months of restrictions on in-person guests.

Reports showed that weekend trippers have accounted for up to 70 percent of the occupancy levels of some resort hotels after they re-opened since June for local guests as arrival of foreign tourists is yet to commence.

Meanwhile, food inflation rose by 0.3 percent in August from July while the year-on-year growth in the prices of the food category was recorded at 12.3 percent, an acceleration from 10.9 percent in July.

The prices of coconut, vegetables, big onions, turmeric, eggs, chicken increased from their prices in July while the prices of sea fish, coconut oil, papaw, lime, red onions and White Kekulu rice logged declines compared to a month ago.

Meanwhile, the so-called core prices or core inflation measured barring the often volatile items such as food and energy rose by 3.2 percent during the 12 months to August 2020, unchanged from July.

Core prices are mostly used to measure consumer prices in an economy.

Offering a projection of the CCPI-based headline inflation, the Monetary Board recently said they expect that to remain subdued in the near term.

“Impact of the measures to stimulate economic growth and the normalisation of global oil prices could exert some upward pressures on inflation towards mid-2022,” the Monetary Board said in a special note to the most recent monetary policy statement.

The Central Bank continues to maintain its year-end inflation range at the original mid-single digit levels—4 percent to 6 percent—as the economy is growing far below its potential due to the coronavirus impact which undermines demand-driven price pressures.