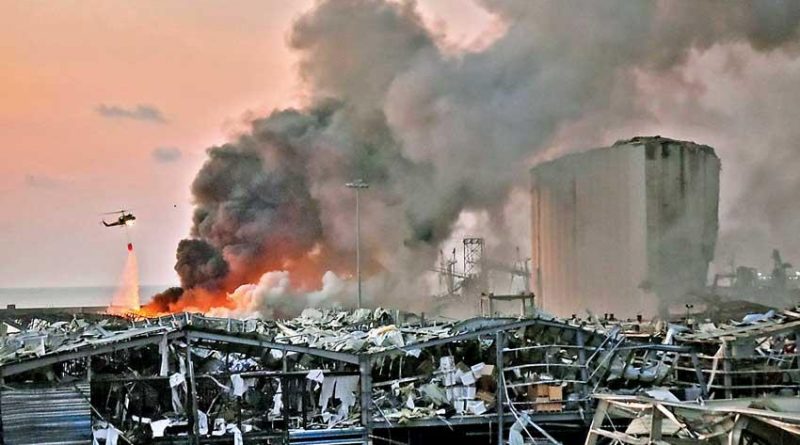 ri Lankan migrant workers employed in Middle Eastern countries are one of the most vulnerable groups. The recent explosion which caused a 10-kilometre radius of destruction in Beirut, Lebanon have made their situation even direr. There have been a considerable number of foreign migrant workers among the bodies dug up from the Beirut rubble. Many of the victims are thought to have been working at the port or in nearby neighbourhoods at the time of the explosion.

Fortunately, so far there have been no deaths of Sri Lankan migrant workers in the Beirut blast. However, twenty Sri Lankans have suffered injuries and most of them are females. Their accommodation facilities have also been destroyed with whatever they had saved after all these years of working.

As the COVID-19 pandemic struck, these workers had not been paid properly for months and have been requesting from the Sri Lankan government to bring them back to the island as soon as possible. Workers whose living and working conditions have not been good long before the pandemic, are more desperate due to the economic downfall in Lebanon and now with the massive explosion.

According to Lebanese rights groups, the ill-reputed sponsorship system of migrant workers, known in Arabic as ‘kafala,’ which dates back to the 1960s, has made it more difficult for the presence of foreign migrant workers to be monitored by the Lebanese government. They have told the media that the government has failed to identify many of the dead bodies of workers at Beirut’s hospitals. There are over 250,000 foreign labourers living in Lebanon and the number of Sri Lankans among them are around 25, 000.

Several among the twenty Sri Lankan migrant workers who were injured in the blast have also become homeless with the explosion. According to the Sri Lankan Ambassador to Lebanon Shani Karunarathne, the injured Sri Lankans are currently being treated in hospitals and their conditions are not critical.

“Boarding places of Sri Lankans have also been damaged due to the explosion. The Embassy has taken action to send dry rations for the affected Sri Lankans while those who are displaced have been provided with temporary accommodation by the Lebanese Government,” Karunarathne said.

Lebanon’s economic crisis was worsened by the Covid-19 pandemic. In recent weeks, the Lebanese pound has lost 60% of its value against the dollar and prices of basic goods soared. Unemployment has risen to 35% and an estimated 45% of the country’s population is now below the poverty line.

According to the Lebanese media reports, worrying 75 percent of Lebanese were already in need of aid before the deadly explosion, and one third of citizens had lost their jobs, with one million people living below the poverty line. The local currency has also lost 80 percent of its value, amid a severe dollar shortage. The explosion, according to the Lebanese media reports, has caused up to $15 billion in damages to the city and leaving 300,000 residents homeless.

The foreign migrant workers who became more invisible and disposable with more crises the Lebanese government are facing, a Filipino domestic worker took her own life recently a day after arriving at a shelter run by the Philippines Embassy for workers waiting to return home after losing their jobs. Suspected suicides or escape attempts of foreign household workers have become a frequent occurrence in many Middle Eastern countries, with reports recording at least one incident a month. During last year, 36 Sri Lankan migrant workers have committed suicide and most of them were working in Middle East.

The situation is worse for undocumented workers. Nearly 7000 Sri Lankans live illegally in Lebanon including those who escaped their employers and those who are with expired visas. Although there have been many discussions and bilateral efforts by the Sri Lankan government with Lebanese counterparts to regularise the undocumented migrant workers, there are workers who still avoid it because they have to return to Sri Lanka if they surrender.

Alarmingly, despite confirmation by Lebanon’s Health Ministry that they had identified the missing persons in the wake of the blast, Lebanese activists have reported that migrant workers are not being included in the official missing persons tally.

Since the early 1990s, there has been a large influx of Sri Lankan women into Lebanon, as domestic labour in private households. The Sri Lankan government, as with other countries, has actively encouraged the export of domestic labour as it has become the largest single source of foreign revenue for the country.

Many are trapped as the Sri Lankan government had halted accepting them citing poor quarantine facilities within the country. Workers who want to go back face another issue. A ticket back to Sri Lanka costs Rs. 121,500 according to the Sri Lankan Ambassador to Lebanon. She told the Daily Mirror that many workers who want to go back say that they cannot afford the exorbitant costs of repatriation flights though the government has now resumed the repatriation process after the election.