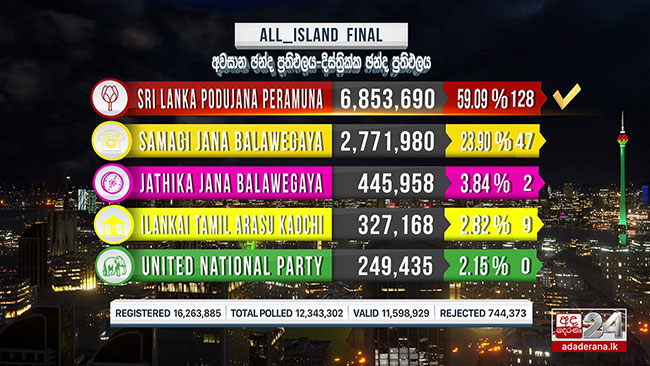 The all-island final result of Sri Lanka’s General Election 2020 has been released by the Election Commission.

The Sri Lanka Podujana Peramuna (SLPP) has claimed resounding victory in the parliamentary election after polling a total of 6,853,690 votes, which is 59.09% of the total valid votes.

The SLPP led by Prime Minister Mahinda Rajapaksa has secured 128 out of the total 225 seats in the Sri Lankan Parliament.

The Samagi Jana Balawegaya (SJB) led by former Opposition Leader Sajith Premadasa has obtained the second highest number of votes in the poll.

Jathika Jana Balawegaya (JJB) led by Anura Kumara Dissanayake is the party with the third highest number of votes overall and secured 02 seats in parliament. The JJB polled a total of 445,954 votes (3.84%).

The UNP failed to win a single seat in parliament for the first time in the history of the grand party. However, it has received one National List seat.

Parties including ITAK, JJB, AITC, UNP and ‘Our Power of People Party (OPPP)’ have received a National List seat each.