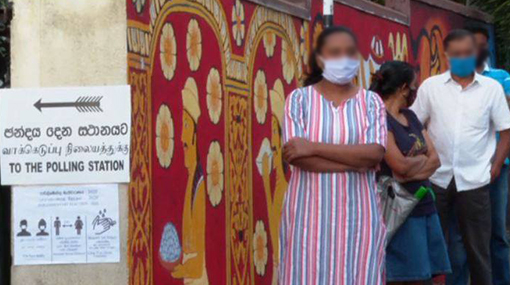 The process is scheduled to come to an end in the evening at 5.00 pm.

Polling will be carried out at 12,985 polling stations across the island under beefed-up security provided by more than 5,000 Police and civil defence personnel.

On Tuesday (04), senior polling officers had transported the ballot boxes to the polling stations, under special security of the Police.

A total number of 16,263,885 voters have qualified to exercise their franchise in this tight competition among 7,452 candidates from 20 political parties and 34 independent groups. They are contesting for 22 electoral districts.

The majority of voters in the country are reported from Gampaha District, adding up to a total of 1,785,964.  Meanwhile, Vanni electoral division – which consists of three administrative districts namely Mullaitivu, Mannar and Vavuniya – has recorded the lowest number of voters, which amounts to 287,024.

The parliamentary election was initially scheduled to be held on the 25th of April, however, the polling date was put off twice in the wake of the COVID-19 outbreak.

Due to the risks posed by the novel coronavirus, the health guidelines introduced by the authorities will be strictly adhered to during the entire process.

The voters under self-isolation have been facilitated to cast their votes after 4.00 pm.

The Chairman of the Elections Commission, Mahinda Deshapriya, meanwhile, said the results of the General Election 2020 will be issued before midnight on August 06. It is expected to issue the results of the preferential votes before Friday (August 07).

All the voters are mandated to wear a face mask when they enter their respective polling stations.

At each polling station, voters will be provided with sanitizer to disinfect their hands.

Voters have been instructed to remove the mask and show their faces to the polling officer to whom they hand over their identification card.

In the meantime, the electoral ink used at the polling stations will be applied with a single-use special-waxed paper as a measure to prevent the spread of the novel coronavirus.

The voters have been instructed to bring their own pen – either black or blue – to mark the ballot paper.

Meanwhile, a second copy of the polling card can be downloaded from the Elections Commission’s official website.

However, registered voters will be able to cast their vote after verifying their identity, even without a polling card, according to the Election Commission.

Ada Derana will bring you every detail of the General Election 2020 until the release of its final results. The general public can catch the latest updates of the election via Ada Derana websites, TV Derana, Ada Derana 24 channel, FM Derana as well as the SMS alert service.

The special election day coverage of Ada Derana 24, ‘Sri Lanka Decides’, will be broadcast 24 hours with a revolutionary visual experience.