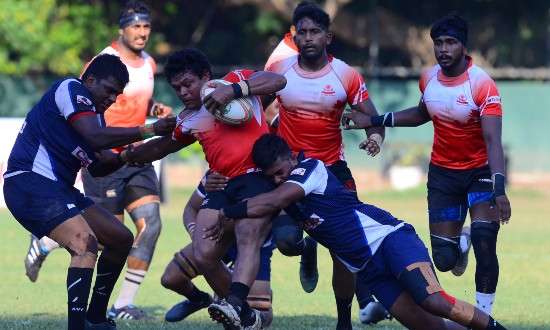 Kandy Sports Club has been the most dominant club rugby side in the last three decades winning the Inter-club League title 21 times while other big Colombo-based clubs such as Havelock SC, CR & FC and CH & FC have often found themselves in the top four.

Apart from the elite clubs, the most impressive team in the last five years or so has been Police Sports Club who played particularly well whenever they were allowed to field foreign players. Whoever scouts that talent for them has been doing a wonderful job landing players such as Apisai Naqaliva, Filimoni Seru and most recently Emosi Vunivosa.

However, in reality, it has been a tough going for teams like Police and the tri-forces because all the super-stars from Inter-school League would often join Havelock, CR or CH, and if they perform incredibly well in the inter-club matches, then they are snapped up by Kandy — the latest example being Shawket Lahir, who was Havelock’s highest try scorer last season. As it stands, that is about the highest level a rugby player could reach in Sri Lanka, but why?

It’s no secret that most of the inter-club players prefer to move to the Hill Capital even though it would limit their playing time considerably, because Kandy does look after their players very well.

Even at a time of crisis such as this, where most of the Colombo based elite clubs are unable to pay their players Kandy somehow pays 75% of each player’s salary which is incredible.

However, it was reported that most of the rugby players attached to leading companies lost their jobs after COVID-19 resulted in cancellation of all types of sport event contacts.

Sri Lanka Sevens captain and Kandy full-back Danusha Dayan recently posted an emotional message about how they have been asked to leave their jobs by their respective companies.

“We were the people who haven’t thought about our future and played for the honour of our country, we have given our best to the country, and we got the opportunity to play for the leading companies so they could gain reputation because we have represented the country, and we have given our best to win trophies for the companies who have hired us. They have gained reputation because of us and they promised us they will not give up on us. Due to this pandemic they told us to work for them and we have given our best working for them. There are players who have got injured and who couldn’t do their own work. We played for them whenever they wanted and we worked for them when they need. Eventually due to this pandemic all the companies are going through hard times, but in these prevailing circumstances is it fair to tell players to leave their jobs? So who are going to take responsibility of the current national players and future national players? Sri Lanka Rugby also needs to answer this. If this continues who will represent the nation and mercantile companies? Is this the way you treat Sri Lankan national players?” Dayan posted on his personal Facebook account.

On top of this, certain clubs have also stopped paying salaries for their players which leaves most of them with zero income. Unfortunately this also includes certain national players, so what’s next for them?

It has been reported that arguably the best player of the last season who scored plenty of tries for one of the elite clubs in Colombo, also earning his place in the national squad, is set to leave in pursuit of joining one of the tri-forces.

The player in his early 20s appears to be facing financial issues given the fact his mercantile team, club team, and national team have turned their backs on him. Surely, the player cannot afford to be in the same situation when he gets to his early 30s.

The forces on the other hand may not give lucrative contracts, but certainly much stable ones that even after playing rugby, the players will have a future. For instance, Daily Mirror can confirm that Police Sports Club has ensured that all of their rugby players are paid despite the crisis.

This leaves the players with a clear opportunity to continue their rugby in a much more stable environment, meaning in the years to come, the Police, Army, Navy and Air Force could attract a lot of top players.