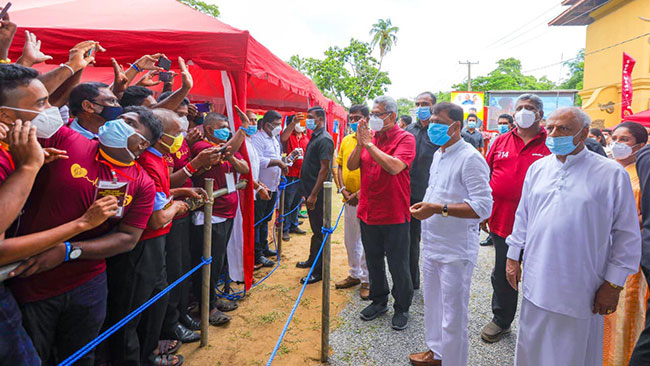 President Gotabaya Rajapaksa stated that the city of Kelaniya will be developed curbing the drug menace and underworld while preserving the city’s historical heritage and pride.

President made these remarks touring Gampaha district for the second time today (30) in support of the candidates of Sri Lanka Podujana Peramuna contesting next week’s Parliamentary Election.

The meeting was organized by candidate Sisira Jayakody. The “Ten Fold Kelani Declaration” aimed at the development of the area was presented to the President.

While paying attention to the issues raised by the people present at the venue, the President requested the public to elect a strong Parliament to ensure a development process that preserves the grandeur of Kelaniya.

Attending a public gathering organized by candidate Nalin Fernando in Ja Ela, the President inquired into inadequacies in the area.

President Rajapaksa stated that he will take steps to reduce the flood risks in Gampaha district by renovating all the canals in the area. The President also promised to take steps to develop the Ja-Ela city.

President Rajapaksa was cordially received by the people gathered at the public meeting organized by candidate Lalantha Gunasekara at Andiambalama area in Katana, when he arrived at the venue.

The Maha Sangha at the scene highly commended the   ‘Saubhagye Gewaththa’ (Home Garden of Prosperity) programme launched by the government and pledged to make the religious places including the temples as a center point to promote this programme among the public.

The Maha Sangha pointed out the importance of using all the religious places to distribute seeds and information.

A group of students gathered at the venue requested the President to swiftly implement the proposed education policy in ‘Saubhagye Dekma’, policy statement which will enable the students to complete their degrees at the age of 20.