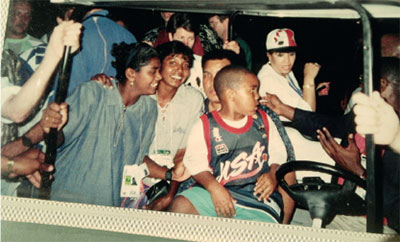 Legendary boxer Muhammad Ali (centre) lit the Olympic Torch at the Atlanta Game. Here future Olympic medalist Susanthika Jayasinghe and Sriyani Kulawansa pose with the legend when he toured the Olympic village during the Atlanta Olympics. Legendary boxer Muhammad Ali’s presence to lit the Olympic torch was one of the most iconic moments in sports and for Sri Lankans the Games was memorable for Sriyani Kulawansa’s record breaking feat and Sugath Thilakaratne’s giant killing performance in the men’s 400 metres heats.

Exactly twenty four years ago on this day, brushing shoulders against the world’s best, Sriyani Kulawansa clocked 12.91 seconds in a photo-finish in the women’s 100 metres hurdles at the Atlanta Olympics. She missed the semi-final by the skin of her teeth but it was a remarkable achievement as she made the presence of the Asian continent felt at the world’s biggest stage. She was the only Asian to reach that higher in a field dominated by European and US counterparts and to date the 12.91 seconds feat remains the women’s 100 metres hurdles national record. Two decades after the impressive feat Kulawansa regrets that her record had remained untouched too long.

“It had remained unbroken means that we (Sri Lanka) haven’t made progress in this event. That is something that I regret though I have lot of fond memories from the Games when I look back,” Kulawansa told The Island in an interview.

“Things are different today. Young people look for instant results. With knowledge available in the internet, what you want is at your fingertips. Running hurdles is not easy. You have to train hard for that. Young people are not willing to put their bodies under so much of stress,” assessed Kulawansa who also takes part of the blame for not persuading enough as a coach to bring the best out of hurdlers.

Sriyani Kulawansa is the only Sri Lankan hurdler to have clocked sub 13 seconds over the 100 metres hurdles. Picture courtesy Gettyimages

“Compared to two decades ago now we have few hurdlers who are competing against each other. That is something that we can be happy. When I competed I had to ask for 100 metres sprinters who were not hurdlers to take starts with me. When I was attempting records I made sure I got athletes like Jayamini Illeperuma, Thamara Samandeepika, Damayanthi Menike and co to take starts with me. Rules those days were such that for a record to be recognised you had to have at least five athletes competing. Hurdling was not something that girls liked though I remember there was crowd attraction for it. When I first established the national record in 1991 I remember that there was a huge crowd alongside the 100 metres track at Police Park to witness me hurdling,” recalled Kulawansa.

Kulawansa, who is currently attached to the Ministry of Education as a project officer said that the current education system was also discouraging many to take up sports.

While only a handful of female athletes have run the 100 metres hurdles under 14 seconds, Kulawansa is the only Sri Lankan to have clocked a sub 13 seconds according to Athletics Association of Sri Lanka statistician Saman Kumara.

Hurdling was not a discipline that Kulawansa put much thought into when she was at school. She was selected in the netball, volleyball and track and field (high jump) national pools simultaneously. And it was at that point that Lakshman de Alwis (former national athletics coach) instructed her to choose one discipline. She took hurdling seriously under Dervin Perera’s guidance and first took the national record under her belt in 1991 and from then on there had been no one closer to breaking the record. Hurdling took her to unprecedented heights as she represented Sri Lanka at almost all major international MultiSports events and medal success at Commonwealth Games, Asian Games, Asian Championships and SA Games.