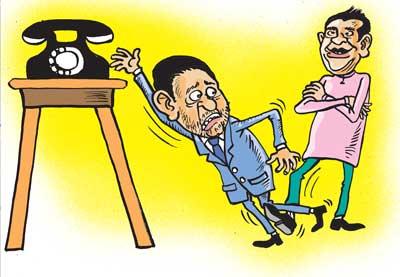 A nephew of a Green party stalwart from Puttalam has entered the upcoming race from the Colombo district ‘Telephone’ list.

This young man who has come up in politics thanks to the patronage extended by the Green party leader has now thrown in his lot with Punchi Dasa.

He is now said to be getting the full backing from both Punchi Dasa and the Colombo district’s tall lanky leader.

However, a group of some former Diyawanna politicos of the same party who have developed an antipathy towards the leader’s ‘blue-eyed boy’ is said to be employing all means at their command to undermine the latter’s campaign.

A ‘Telephone’ politico who had reportedly once distributed ripe plantains to flood refugees in his constituency is leading the group against ‘the blue-eyed boy’, they say.