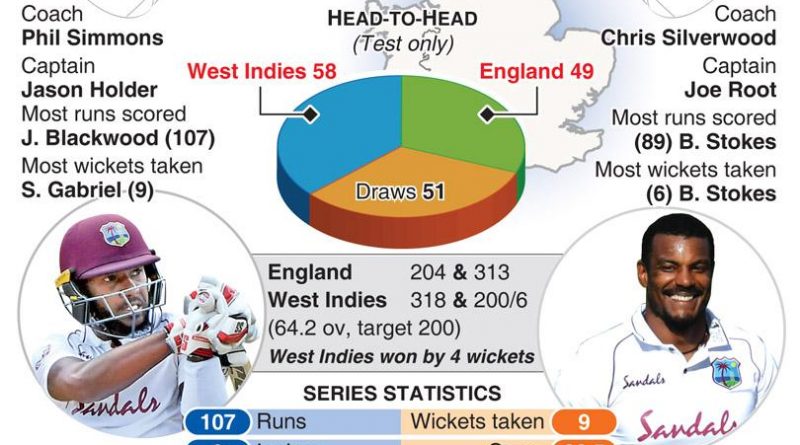 England have dropped batsman Joe Denly and rested pacemen James Anderson and Mark Wood for the second Test against the West Indies starting on Thursday, with Joe Root returning as captain.

But the star batsman has slotted back into the side for the Test at Old Trafford.

The hosts, who face a gruelling schedule of six Tests in seven weeks, including three against Pakistan, have decided to give Anderson and Wood, who both played at Southampton, a break.

Left-arm paceman Sam Curran has also been recalled while Sussex seamer Ollie Robinson has been included in a Test squad for the first time.

The 34-year-old Denly was always likely to make way after two low scores in last week’s loss left him with a modest average of 29.53 from 15 Tests.

Denly’s place was put under further threat by an innings of 76 from Kent team-mate Zak Crawley at the Ageas Bowl.

“It’s never an easy decision, never easy having to leave someone out,” Root told a conference call on Wednesday.

“Joe is someone who has done a fantastic job for us over a period of time and he’ll be as frustrated as anyone that he’s not been able to covert those opportunities,” he said before it was announced that Anderson and Wood had been left out.

He added the decision to omit Broad at Southampton “wasn’t taken lightly”.

“But one thing you can guarantee with Stuart is when he gets his opportunity again he will desperate to prove a lot of people wrong and put in a really strong performance,” Root said.

West Indies captain Jason Holder, meanwhile, said his side will stay focused on the present despite the chance to seal a first Test series win in England for 32 years.

Last week the Caribbean side marked international cricket’s return from the coronavirus lockdown with an impressive four-wicket win over England in the first Test at Southampton.

That means they need just one more victory in the two remaining matches, both at Old Trafford, to clinch the series.

For decades, West Indies have struggled to live up to the all-conquering side of the 1980s that included Gordon Greenidge, Viv Richards and top-class fast bowlers such as Malcolm Marshall and Curtly Ambrose.

The Caribbean side have not won an away series against any of the seven sides currently ranked above them since 1994/95, when they beat New Zealand.

In the 25 years since, the only teams they have beaten outside the Caribbean are Zimbabwe, Bangladesh and Afghanistan.

But towering all-rounder Holder, who took a Test-best 6-42 at Southampton, told reporters on Wednesday he had not focused on the history.

“Winning the first Test match is just one piece of the puzzle,” he said. “We’ve got two other games to play and we don’t get ahead of ourselves.”

But Holder was well aware of the significance of last week’s success to cricket fans back home, a point reinforced when he spoke to three prime ministers from the Caribbean as a guest during a radio show on Tuesday.

“This COVID period has really put a dampener on things for the world and things like cricket, especially in the Caribbean, can unify the Caribbean,” said Holder.

“It is really good to see how many hearts we’ve pleased in the Caribbean so far but in order to take it a step further they all want us to win this series.”

Last week’s success was only the second time that the West Indies had won a Test match in England for 20 years.

Their only other Test win on English soil in that period came three years ago in a match in which Shai Hope became the first batsman to score hundreds in both innings of a match at Headingley.