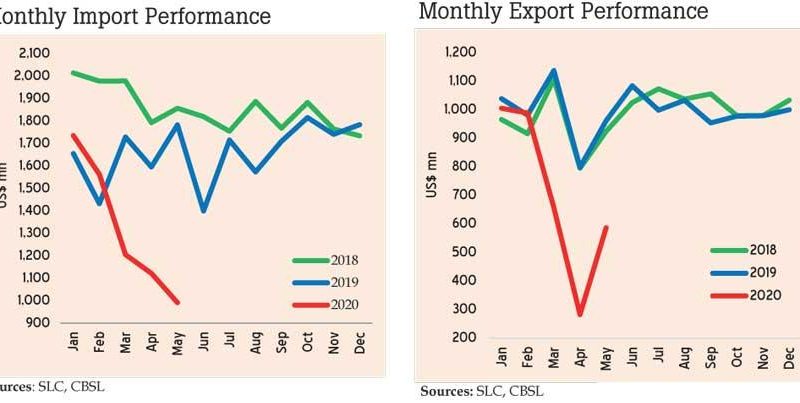 Sri Lanka’s trade deficit narrowed by US $ 416 million in May 2020 to US $ 407 million, as imports slumped to less than US $ 1 billion for the first time since March 2010, amid the government-imposed import controls put in place to ease the pressure on the exchange rate and foreign reserves from the adverse effects of the COVID-19 pandemic.

The external sector data released by the Central Bank yesterday for the month of May showed the expenditure on merchandise imports dwindling by 44.3 percent year-on-year (YoY) to US $ 994 million, particularly with the expenditure on intermediate imports more than halving.

The exports staged a recovery from April to US $ 587 million, with the gradual easing of the lockdown measures since mid-March but were still 39 percent down from a year ago, with both industrial and agricultural exports losing steam, amid the supply chain disruptions and a limping global economy due to COVID-19.

The import expenditure on intermediate goods more than halved in May 2020 to US $ 486.3 million, with Sri Lanka’s fuel bill tumbling by 84.4 percent YoY to US $ 62.9 million, amid lower import volumes and prices.

Expenditure on imports of textile and textile articles more than halved in May 2020 to US $ 120 million, amid global supply chain disruptions as well as low demand prospects for garment exports in the period ahead.

“Import expenditure on other intermediate goods such as base metals, plastic and articles thereof, all sub categories of investment goods and non-food consumer goods imports declined mainly due to the measures taken by the government and Central Bank since March 2020, to restrict imports and the disruptions to global supply chains from the COVID-19 pandemic,” the Central Bank said.

In other major inflows to Sri Lanka’s current account in the month of May, no earnings from the tourism industry were recorded, due to zero tourist arrivals in the month with the country’s borders remaining closed.

The cumulative earnings from tourism, which are estimated based on tourist arrivals, remained at US $ 956 million during the first five months of 2020, recording a drop of 46.3 percent YoY.

Meanwhile, a net outflow of foreign investment amounting to US $ 3 million was recorded from the rupee-denominated government securities market in May 2020, resulting in a cumulative net outflow of US $ 454 million during the first five months of 2020.

The total outstanding exposure of foreign investment in the government securities market remains significantly low at US $ 126 million, as at end-May 2020.

There were net outflows of US $ 36 million from the secondary market of the Colombo Stock Exchange (CSE) in May 2020 (no primary market inflows were recorded in May 2020), subsequent to the resumption of trading at the CSE, from May 11, 2020.

On a cumulative basis, the CSE recorded a net outflow of US $ 64 million in the first five months of 2020.

Further, the net outflows on account of long-term loans to the government amounted to US $ 313 million in May 2020, mainly due to the repayment of a syndicated loan of US $ 333 million.

Meanwhile, the Sri Lankan rupee recorded a significant appreciation during the month of May 2020. In this context, the rupee, which depreciated by 9.1 percent against the US dollar by April 9, 2020, appreciated thereafter to record an overall depreciation of 2.3 percent thus far during the year up to July 13, 2020.