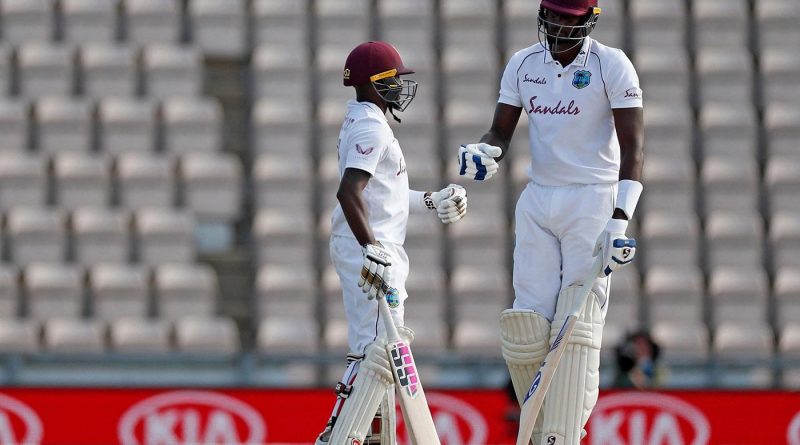 Jermaine Blackwood’s soft dismissal in the first innings hadn’t pleased Michael Holding one bit. “A leopard never changes its spots,” he’d said on air, referencing Blackwood’s high-risk ways at the crease. On that occasion, he had lazily driven Dom Bess straight to mid-off but come the second innings, come West Indies’s tricky run-chase of 200 in the fourth innings, Blackwood was anything but lazy. He scored 95, his first fifty in three years and 11th overall, and led West Indies to a historic four-wicket win over England in Southampton.

That his dismissal in the second innings was identical to the first only makes him Blackwood. A leopard probably doesn’t change all its spots, but West Indies will take it this time.

The start of the day forewarned something very different for the visitors though. West Indies allowed England to add 29 runs for the last two wickets and then lost three wickets for only 27 runs in the chase. It was Jofra Archer starring with the bat (23) and ball (2 for 13) in that opening session, fired up or not by Tino Best’s “toothpaste bowling” jibe on Twitter.

Archer picked up the wickets of Kraigg Brathwaite (bowled) and Shamarh Brooks (lbw) in consecutive overs, getting both the wickets with deliveries that came back in after a slew of back of a length balls. Mark Wood employed similar tactics and got the wicket of Shai Hope in his first over, leaving West Indies gasping at Lunch. That their opener John Campbell had retired-hurt after a blow from Archer on his boot only made it all worse.

The middle session was England’s doom. Ben Stokes opted for Wood/Dom Bess over Archer, and in part allowed Chase and Blackwood to settle in for the fortune-changing 74-run stand. At one point in the session, Blackwood was dropped twice off Stokes’s bowling (by Jos Buttler down the leg-side and by Rory Burns at slip) and Zak Crawley missed an easy run-out from cover — all in a space of 19 balls. It was Archer who bowled seven overs on the trot, dismissed Chase with a rising bouncer and made England believe again.

Blackwood was joined by Shane Dowrich for another crucial 68-run stand. It wouldn’t have been that without the DRS, which helped Dowrich overturn a caught-behind dismissal off Archer and stay on. Ten minutes before Tea, Blackwood lofted James Anderson over mid-off, summing up not just England’s decline from the mid-session Archer-induced high but also the nature of his own innings — that perfect mix of attack and defence that Holding keeps asking of him.

West Indies needed only 57 runs in the final session, guaranteeing a fair bit of drama and a close finish. But it wasn’t quite that.

Stokes bowled Wood and Archer together for the first time in the Test but the ploy, with all its merits, came up short. It was Stokes himself who delivered the breakthrough in his first over on return, getting Dowrich caught-behind a ball after reprieving him with a no-ball. The running from Jason Holder and Blackwood was all over the place, the duo coming close to being run-out twice in two balls at one point of time. In that sense, Blackwood’s chipping Stokes to mid-off and getting out might have come as a relief for West Indies.

It was Holder’s level-headed 14 not out that parried West Indies to “one of the best victories” he had seen. And just like that, cricket’s historic return from a 117-day sabbatical in the middle of Covid-19 pandemic was ticked off, memorably.