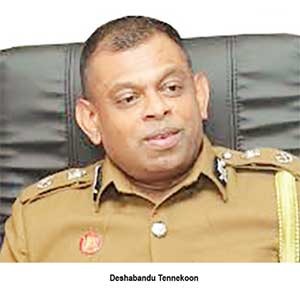 Senior police officers may have been involved in covering up the true story of the fatal accident caused by Sri Lanka Test cricketer Kusal Mendis, informed sources told The Island. Mendis’ Rs. 44 million Range Rover knocked a 64-year-old man on his way to work in a bicycle in Panadura. In fatal accidents, usually the accused is remanded for14 days but there has been a growing trend followed by the Police to let politicians, their sons, rich and the famous go scot-free.

What is worse in Mendis’ case was that this was a hit and run. Had Mendis stopped and taken the man to the hospital, his life could have been saved. Source said, an ambulance arrived only 40 minutes after the accident and by the time the victim was taken to the hospital he had died.

Police insist that Mendis was not drunk but the fact of the matter is that he had gone home after causing the crime and by the time he turned up at the Police station, a considerable time had elapsed. Police took further time to produce  the Test cricketer to a Medical Officer and by then the chances of proving he was driving under the influence of alcohol had all but gone.

The focus is now on Senior DIG Deshabandu Tennekoon who is in-charge of Western Province. Sources close to investigation said that Tennekoon may have been the main man behind the cover up.  SSP Kamal Pushpakumara, who seems to be having a close rapport with the players, also believed to be involved in the cover-up that also included the player’s agent – Asanka Perera.

Mendis could have been charged on many counts  – causing death, hit and run, speeding, driving on the wrong lane.  But Panadura Police chose to ignore all counts and all what they looked to be keen was to tell media that the player was cleared of drunk driving.

So what was Mendis doing till 5 in the morning. The Island learns that after a function, he had gone back to the residence of another cricketer – Sachith Pathirana and they had been drinking. At least two other players were on the spot – Avishka Fernando and Akila Dananjaya.

Mendis’ lack of remorse after the incident also has been disappointing. The cricketer had paid Rs. one million to the family of the deceased. His match fee for one Test match is Rs. one million.