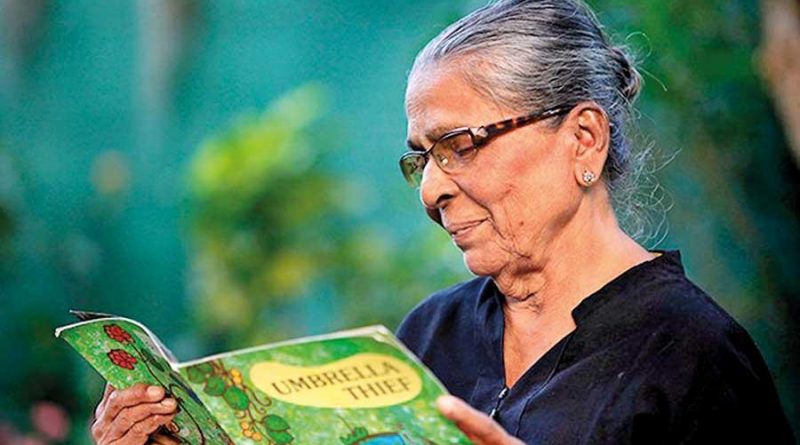 Last week, 1 July, saw the passing of one of Sri Lanka’s most prolific children ‘s book authors, Sybil Wettasinghe. Wettasinghe (Kala Keerthi Sybil Wettasinghe) passed away at the age of 92 while receiving treatment at the Sri Jayewardenepura Hospital. Her funeral was held on 3 July.

Her life and times

Born in Gintota, near Galle, in 1927, Wettasinghe was an alumna of Holy Family Convent, Bambalapitiya, and moved on to work in publishing. Wettasinghe initially worked at the Lankadeepa newspaper before moving on to Lake House Publications, becoming the main illustrator for the Janatha newspaper. She also wrote and illustrated for The Sunday Observer, Silumina, Daily News, and Sarasaviya.

Wettasinghe’s journey as an author began in 1952 when she produced a narrative called “Kuda Hora”, for the children’s page of the Janatha newspaper, eventually adapting the story into a book that received local and international acclaim. Over the course of her career as a children’s book author, Wettasinghe produced over 200 children’s books, which have been translated into several languages for children all over the globe to enjoy.

Wettasinghe’s work won many awards including several State Literary Awards, the Isabel Hutton Prize for Asian Women Writers for Children in 1965,  the Best Foreign Book Award in Japan in 1986, The Gratiaen Prize for most Creative English Book in 1995, and the Nikkei Asia Prize for Culture in 2012, among many others.

Wettasinghe broke a world record in 2020 with her book “Wonder Crystal” being entered into the Guinness Book of World Records for having the most number of alternative endings.

Wettasinghe was married to Don Dharmapala Wettasinghe, who passed away in 1988, and is survived by her children Vinod, Suriya, and Kusala, and her five grandchildren.

Wettasinghe’s work touched the lives of so many. From the very first generation in 1952 who grew up with “Kuda Hora” and the early books, Wettasinghe’s work has formed an integral part of many, many childhoods.

“Dearest ‘Sybil Nanda’ was the reason why we started reading in the first place. She was every child’s superhero. Now, as an early childhood teacher, I can see that she knew children’s minds and how to enrich them. She was capable of reaching out to every child through her own little stories and connecting with them. We have lost a great gem,” said early childhood educator and CIT Kids Head Lashinika Ratnavibhushana.

“Sybil Wettasinghe was the Beatrix Potter of our time. She proved that simplicity is the richest language of all. Her books were akin to a thick duvet covering you on a rainy afternoon as you sipped a kiri thé (milk tea) and ate a Marmite sandwich,” said writer and lifestyle journalist Rohitha Perera.

“Simple, grounded, and always joyful, Sybil Wettasinghe was one of those artists who resonated with all, and truly cultivated the universality of artistic expression, who through her work, brought out its spirited nature to the young and old, near and afar,” said Artra Magazine Editor-in-Chief Azara Jaleel.

“Aunty Sybil was the first Sri Lankan author to tangibly show how our local stories and scenes can shape and change us, and that our stories are as important and impactful as those by Western children’s authors like Enid Blyton or Roald Dahl. Her work also painted a vivid picture of village life in an immersive, non-exotic way for local children who lived in their little urban bubbles. Over 10 years ago, I had the opportunity to attend a writing workshop she conducted at the Sri Lankan Press Institute and I draw inspiration from that to date. Now, having helped found a storytelling collective, I hope to do what Aunty Sybil did for us, create rich wonderful stories that show Sri Lankan life and perspectives,” said Everystory Sri Lanka (a feminist storytelling collective) Co-founder Sharanya Sekaram.

“Her books have shaped me so much to help find my inner child, even as an adult. Her creativity and depth always fascinated me more than her fairy tales,” said entrepreneur, business strategist, and body-positivity advocate Ranjula Herath.

“I was awed by Sybil Wettasinghe from the age of three when my mom used to read her stories to me every night. At five, I won a copy of ‘The Child In Me’ at an art competition and read myself to sleep with it every single day. The way she transported me to a whole other world with her words and art was absolutely astounding. I used to mimic her art style at an early age, and I’m certain that her art contributed to my love of anything artistic and creative that I do, which I take in pride in even today,” said travel enthusiast Duleeka Williams.

“Her colourful stories made our childhoods magical. She took the Sri Lankan mark to the globe as an incredible artist and a writer. Aunty Sybil was a hero of our time,” said interior and furniture designer Sachithra Thillakarathna.

“A world of beautiful colour wrapped in the simplicities of island life, the joys of stories that I read over the years, and greater moments in talking with Aunty Sybil!! Thank you for those moments. Your walk on earth is done but you are alive in our hearts. Thank you for inspiring me to write, and thank you for every chuckle you had when you read my work,” said actress and writer Angela Seneviratne.