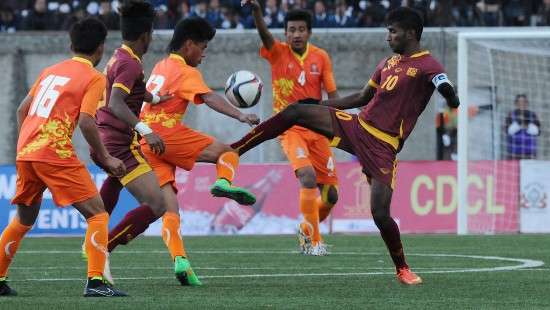 The Football Federation of Sri Lanka (FFSL) is gearing up to host the FIFA World Cup 2022 Doha Asian qualifying tournament, with the first match against South Korea scheduled on October 13 within closed doors.

Sri Lanka will be hosting an international fixture for the first time in seven months since the country was affected by the COVID-19 pandemic.

The Asian Football Confederation (AFC) which decided to revive the postponed qualifying matches in consultation with the world body, have fixed October 8 and November 12 for Sri Lanka’s ‘away’ matches against North Korea and Lebanon.

The AFC has informed that all these matches to be played sans spectators and following health guidelines issued by FIFA and the host nation, Jaswar Umar, Secretary, FFSL told the Daily Mirror on Sunday.

“We have not decided yet whether to host the South Korea match at the Sugathadasa Stadium or Racecourse grounds. Since it has to be played without spectators, Sugathadasa Stadium is the ideal venue for security reasons. We will take a decision on this in the near future. At the same time, the venue for the match in North Korea has still not been decided,” he said.

The three matches postponed because of the viral outbreak were originally scheduled to be played on March 26 (North Korea), March 31 (Colombo) and June 4 (Lebanon).

As preparation for these three matches, the FFSL has made arrangements to resume national pool training from June 22 after the players were sent home in February because of the coronavirus.

Out of the 25-member national pool, 18 players have been called for the first phase of training while the other players would be called in gradually.

The training cycle for the national pool would be 17 days followed by a four-day break, according to the strategy formulated by Bosnian-born head coach Amir Alagic.