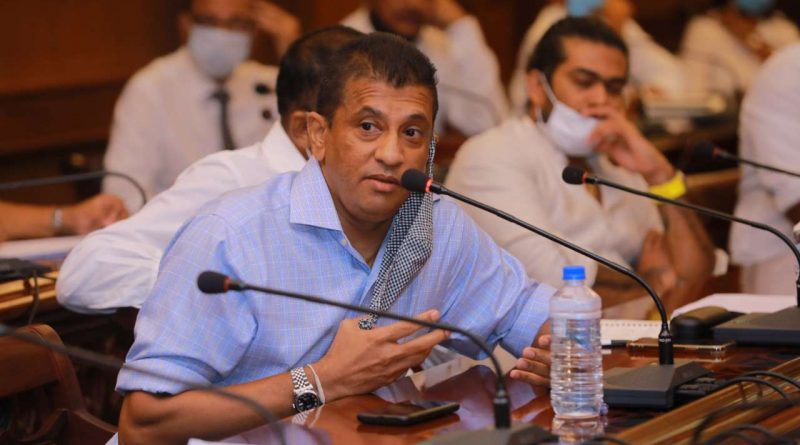 A social media outcry triggered by the ill-timed announcement that a multi-million dollar cricket stadium was to be built in Homagama forced its suspension after Prime Minister Mahinda Rajapaksa gave heed to those campaigning against the initiative.

Led by former Sri Lanka skipper Mahela Jayawardena, several cricketers protested against the proposed complex on the grounds that the funds would be better spent on development of the sport than dumped on costly infrastructure that would bring scant returns on investment. For the greater good of the game, they said all efforts should be channelled to construct more turf wickets and improve infrastructure like swimming pools and indoor nets to existing venues in the country.

The stadium was to be built on a 26-acre land allocated by the government around the proposed Sports Complex at Diyagama. Once completed, it was to be the country’s biggest floodlit stadium with a 40,000-seater capacity. The Sri Lanka Cricket (SLC) Executive Committee has approved the project on the grounds that such facilities were needed to stage global International Cricket Council (ICC) events despite concerns about viability and timing.

The Board was to obtain a bank loan and not secure ICC funds as politicians had claimed. It was to be repaid in 15 years using funds SLC receive from the ICC.

The project was still at a tender stage when it made headlines last week. A private consultancy firm has done a “conceptual design and a design approach” proposal. And the Board has only called for expressions of interest (EoIs) from reputed audit firms to carry out a financial feasibility when a minister seeking for re-election at the next parliamentary election announced it after a site visit on Sunday. It would have taken at least six more months to finalise matters before construction is launched and at least three years to complete the project.

Minister Bandula Gunawardena’s intentions were clear. He was using the opportunity to boost his image in showing the public he was instrumental in getting the project to an electorate he represents.

But the announcement seemed ill-timed and SLC paid the price. The project was suspended after the Prime Minister met stakeholders along with Jayawardena and Roshan Mahanama who had been vocal against the project. Also present were SLC office-bearers, former skippers Sanath Jayasuriya and Kumar Sangakkara, current T20 captain Lasith Malinga, several former and the present Sports Ministers and former SLC presidents.

The cricket greats questioned the wisdom of cricket officials in taking on a costly venture when the country was struggling with a pandemic. Funds should first be invested in developing the game at the grassroots and not on expensive infrastructure.

Jayawardena particularly highlighted the need to invest in school cricket, an aspect he said SLC had ignored for the past 15 to 20 years. A large number of schools had neither grounds nor turf wickets. He urged authorities to invest in these facilities. He has been a critic of the school and domestic cricket structure for many years and helped create a blueprint to resurrect the game at the grassroots. It has been left to gather dust by authorities.

Other veterans of the game backed his comments at the meeting and asked SLC to get their priorities right.

Does Sri Lanka need another state-of-the-art cricket facility when existing ones were sorely underused, they asked. For example, the Sooriyawewa International Cricket Stadium in Hambantota, a white elephant that the SLC undertook to please political masters at the time, hosted just one match in three years.

There has been no international cricket since 2018 at the Dambulla International Cricket ground, the country’s second floodlit stadium. The question of why invest in another was rightly asked. These massive developments have also often led to corruption. The government valued the Hambantota cricket ground at Rs. 852 million but spent Rs. 4.2 billion to build it, leaving many questions answered.

A new facility in Colombo will be of benefit in the long run when bidding for hosting rights of ICC tournaments, argue Board officials. But it is neither a necessity nor a pre-requisite.

An ICC spokesman confirmed it has never indicated that a country must have a certain number of stadiums of certain capacity to successfully bid for hosting rights. So why go for the costly option when you can use what you have? The existing facilities may require some fine-tuning but that won’t require the US$ 30-40mn the Board expects to dump on the new initiative.

Ana Punchihewa, the man who changed the fortunes of cricket guiding Sri Lanka to their maiden World Cup victory, believes the project is “excellent” but that it should not be at the expense of developing cricket though, for instance, investing on school cricket, improving coaches and umpires, etc.

“This is an excellent location to have a full-fledged international ground with facilities for training,” he pointed out. “The centre can be used as a cricket academy. This is important. And I sincerely hope they will invest on developing these facilities at other venues to make them centres of excellence. This was in my business plan put forward in 1996.”

Punchihewa admits, however, that the proposal came out at the wrong time. Infrastructure developments are vital in developing sports, but it should not be done at the expense of cricket development as renowned administrator Punchihewa says nor should it lead SLC to bankruptcy as it did after dumping millions on the Hambantota cricket ground.