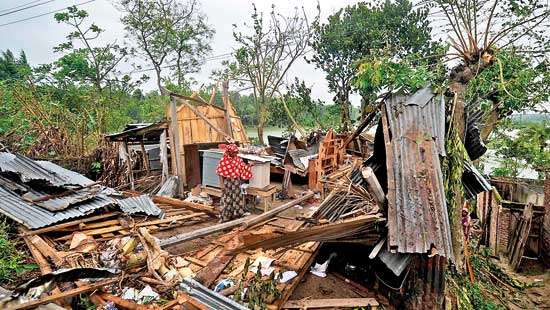 India and Bangladesh began a massive clean-up Thursday after the fiercest cyclone since 1999 killed at least 84 people, leaving a trail of destruction in its wake.

The United Nations office in Bangladesh estimates 10 million people were affected, and some 500,000 people may have lost their homes.   But the death toll was far lower than the many thousands killed in previous cyclones– a result of improved weather forecasting and better response plans.

The disaster has raised fears, however, that overcrowding in storm shelters will exacerbate the spread of coronavirus.    Improved weather forecasting meant Bangladesh was able to move some 2.4 million people into shelters or out of the storm’s direct path, while India evacuated some 650,000.

At least 10 million people were still without power on Thursday afternoon in the worst-hit districts of Bangladesh, said Moin Uddin, the head of the rural electricity board. “Huge number of electricity poles fell down after it was lashed by the cyclone, or they were hit by huge number of fallen trees. Transformers, conductors and meters were also destroyed,” he told AFP.