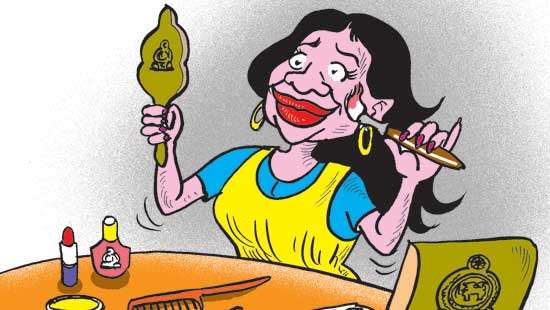 Believe it or not! There is a lady in our Foreign Service with an unusual penchant for a well-groomed look and regularly takes beauty care treatment at public expense. And it had been child’s play for the lady to get funds for her beauty care sanctioned by a political bigwig, they say.

This lady, who held high diplomatic posts in several countries, is said to be serving now in the capital of a very powerful country. It was a white-collar high-up responsible for the Ministry Budget, who had revealed the heavy expenses being incurred by the diplomat-lady at a recent official conference in the presence of the indulgent political bigwig.

The Ministry had to foot a bill running into several million in foreign currency, in connection with her beauty treatment surgery done in the States on a number of occasions. She had made these trips to the States under the pretext of seeking eye treatment there.

The bigwig who had sanctioned these expenditures misusing his powers had quietly listened as the unsavoury details were being unfolded at the Ministry conference, they say.

Those in the highest echelons had come to know about this hanky-panky going on and had reportedly decided to install a new person in the highest position. Meanwhile, a move is afoot to send the Foreign Service big gun as our envoy to the land of Kangaroos, they say.