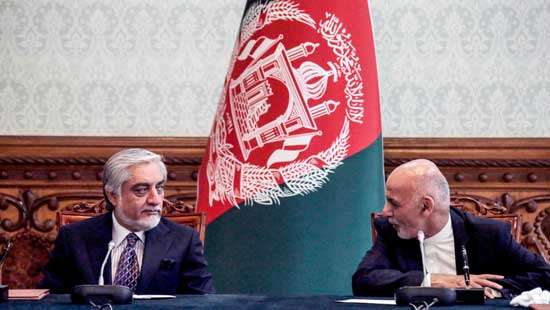 The breakthrough, which sees Abdullah heading peace talks with the Taliban, comes as Afghanistan battles a rapid spread of the deadly coronavirus and surging militant violence that saw dozens killed in brutal attacks last week.

“Doctor Abdullah will lead the National Reconciliation High Commission and members of his team will be included in the cabinet,” Sediq Sediqqi, spokesman for Ghani, wrote on Twitter.
Abdullah’s spokesman, Fraidoon Khawzoon told AFP the agreement ensures Abdullah’s group gets 50 percent of the cabinet and other provincial governors’ posts.

Ghani said it was a “historic day” for Afghanistan and that the agreement was reached without any international mediation. The agreement, a copy of which was seen by AFP, further says that Ghani will make Abdul Rashid Dostum, his former vice president turned ally of Abdullah, a marshal of the armed forces.

Dostum, a notorious former warlord, is accused of ordering the torture and rape of a political rival in 2016.

The agreement names Abdullah to lead future peace talks with the Taliban.