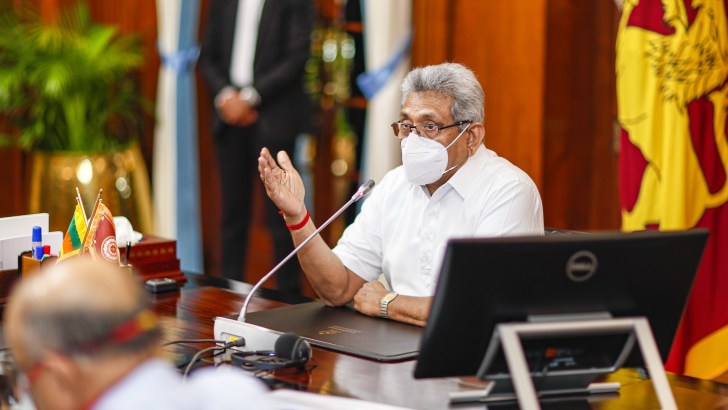 President Gotabaya Rajapaksa has requested the banking sector to deviate from conventional thinking and practice to support the country’s striving to rebuild the economy badly hit by the COVID-19 pandemic.

‘The government was able to keep the corona virus under control. The biggest challenge we face right now is to rebuild the collapsed economy. It will take a long time for the apparel industry to recover. The tourism industry also has suffered a serious setback. A very large amount of revenue and jobs have been lost. The old economic model based largely on imports is no longer viable. We must move towards a production economy. The banking sector can make a huge contribution to make this a success,” the President said.

President Rajapaksa made these remarks during a meeting held at the Presidential Secretariat, on Thursday (14) to discuss how to involve the banking sector in the implementation of Post-Corona Economic Growth and Development Programme while identifying the issues the banking sector confronts with. Governor of the Central Bank Professor W. D Lakshman, Deputy Governors, Chairmen and CEOs of state and private sector banks were present on this occasion.

President Rajapaksa recalling that all sections of the administration, including the health sector, have worked with commitment to overcome the corona menace said that he expects a similar contribution from the banking sector too.

The top priority at the moment is to strengthen the production economy.  There are many areas where investments could be made. Plantation industry including tea cultivation, small and medium scale industrial production, housing and other constructions, agri-based products, value added cinnamon and pepper are some of them. President requested the banking community to provide loans at concessionary rates for these sectors.

“It is not possible to continue with the easy practice of earning profits by providing loans to import vehicles and plastic products etc. More loans should be directed to newly identified priorities. Otherwise, both consumers and entrepreneurs will suffer. When farmers obtain loans at higher rates from the private sources they and their harvest easily become victims of exploitation. It is not healthy at all. Banks should assist not only large scale businessmen but also farmers” said the President adding that a regular review should be conducted to monitor how loans are been utilized. Those who had defaulted loans in the past are not the poor but mostly the rich, President said.

President recalling his pledge in his election manifesto to launch housing schemes for middle income families at affordable prices emphasized the importance of granting loan facilities to the middle income people at a lower rate.

The bank representatives who participated in the discussion expressed their support for the government’s programme for economic revival. During this meeting they presented some of the problems faced by the banking industry and agreed to discuss with the Central Bank and find solutions for them.

Prime Minister Mahinda Rajapaksa and Secretary to the President, P.B. Jayasundera was also present in this meeting.