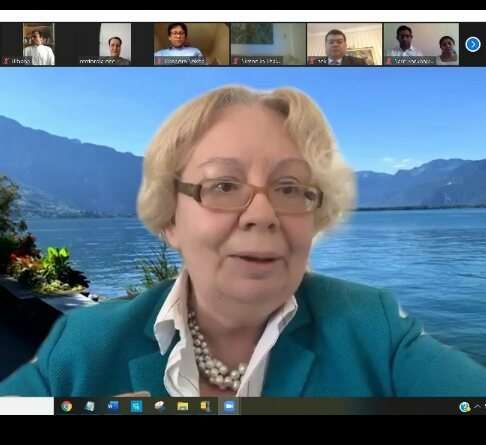 United Nations Director General (UNDG) in Geneva, Tatiana Valovaya has noted the particular relevance of the teachings of the Buddha such as compassion, solidarity and mindfulness, in times of global emergencies such as the current COVID-19 crisis.

According to the Permanent Mission of Sri Lanka in Geneva, Ms. Valovaya said this at a ceremony held to commemorate the International Day of Vesak and the 20th anniversary of the adoption of United Nations General Assembly resolution 54/115 which recognized internationally the day of Vesak.

The commemoration was held today at a special virtual commemoration organized by the Permanent Mission of Sri Lanka to the UN in Geneva together with the Permanent Mission of Thailand to the UN Geneva and the International Buddhist Foundation in Geneva. Delivering the opening remarks, the United Nations Director General highlighted that, while being sacred for millions of Buddhists around the world, Vesak day was also widely observed by non-Buddhists who draw strength and inspiration from the philosophy of Lord Buddha.

“According to the Buddha, to realize enlightenment, a person must develop two qualities – wisdom and compassion. He also told that nothing exists in isolation and that all phenomena are interdependent. Just as profoundly, the Buddha taught that we cannot be happy as long as others suffer. On the contrary, when we do reach out, we discover the best in ourselves,” the Director General stated, noting how the Buddhist concept of mindfulness or “here and now” can inspire renewal of commitment to building world solidarity to ensure peace and dignity for all.

Ajahn Amaro, delivering the Keynote address, spoke of the actuality of loving kindness, radical acceptance of things as they are, and the capacity of the human mind for spiritual training.

Addressing the commemoration event via video link, Secretary, Ministry of Foreign Relations of Sri Lanka Ravinatha Aryasinha paid special tribute to late Hon. Lakshman Kadirgamar, the then Foreign Minister of Sri Lanka who pioneered the initiative, and proposed, in his address to the UN General Assembly on 23 September 1999, that Vesak be recognized as a special day at the United Nations.

In his remarks on ‘The Significance of Vesak Day’, Foreign Secretary highlighted how the teachings of the Buddha have offered to mankind, many millennia ago, the bedrock of modern progressive libertarian values such as peace, freedom, equality and dignity for all humans as enshrined in the Charter of the United Nations and instruments such as the Universal Declaration of Human Rights.

“The significance of Vesak, therefore, lies squarely on the universal and timeless nature of the Buddha’s teaching, and its ever-increasing relevance to present day societies that strive to champion universal human values in the midst of war, distress and widening inequalities,” he stated.

The Foreign Secretary also noted that, as a country with one of the oldest Therawada Buddhist traditions in the world, Sri Lanka is proud to have contributed, throughout its history, to the noble cause of sharing the teachings of the Buddha with the rest of the world, which includes the first ever transcription of the Buddha’s teachings on ola leaf as far back as in the First Century B.C. Ambassador and Permanent Representative of Thailand to the United Nation in Geneva Sek Wannamethee, in his remarks on ‘Buddhists in the era of New Normal after COVID-19’, discussed how the values and principles expounded by the Buddha could help in coping with the realities that have and would follow from the current global pandemic.

The commemoration event also included an address by President of the International Buddhist Foundation in Geneva Ven. Halyale Wimalarathana on the relevance of Buddhist teachings in the modern world. On the invitation of the Permanent Mission of Sri Lanka to the UN in Geneva, the Permanent Representatives of Armenia, Estonia, Fiji, India, Israel, Lao PDR, Libya, Mongolia, Myanmar, Oman, Palestine, Sierra Leone, Vanuatu, Venezuela, Vietnam, Bhutan (CD’A), and other members of diplomatic missions from Azerbaijan, Bangladesh, Brazil, China, Croatia, Cyprus, Germany, Iran, Kazakhstan, Mexico, Montenegro, Nepal, Pakistan, Poland, Serbia, Switzerland, Ukraine and the United Arab Emirates participated at the event. Acting Permanent Representative Dayani Mendis proposed the vote of thanks, on behalf of the Permanent Mission of Sri Lanka in Geneva and its staff.