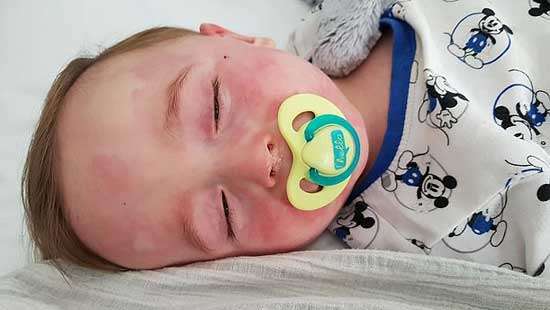 Coronavirus is ‘manifesting’ as a deadly new inflammatory syndrome in some children, a British study revealed yesterday.

Health Secretary Matt Hancock said last week that he was ‘very worried’ by an NHS alert over a serious autoimmune response.

The study into eight cases of children admitted to intensive care with coronavirus-related inflammatory syndrome found that all tested positive for virus antibodies – showing they have previously had Covid-19, often without displaying symptoms.

Experts said the study, published in The Lancet, supports the view that the virus is the cause.

The children, aged four to 14, were all treated in intensive care at Evelina London Children’s Hospital in mid-April. One, a previously healthy 14-year-old boy, died of a stroke after being admitted.

Seven of the eight were clinically obese and six were from Bame (black, Asian and minority ethnic) backgrounds. All had ‘unrelenting fever, rash and generalised extremity pain’, vomiting and diarrhoea.

A common clinical feature was inflammation of the heart and blood vessels, which caused one child to have a ‘giant coronary aneurysm’ after being discharged.

While all tested positive for virus antibodies, nearly all had tested negative for the active virus in swab tests while in hospital.

Scientists said this raised the possibility that the symptoms are part of a delayed immune response to the infection in children.

The study, led by consultant paediatrician Dr Shelley Riphagen, said a further 12 children with similar symptoms have since been treated. Dr Jeremy Rossman, a virologist at the University of Kent, said the findings were ‘very concerning’.