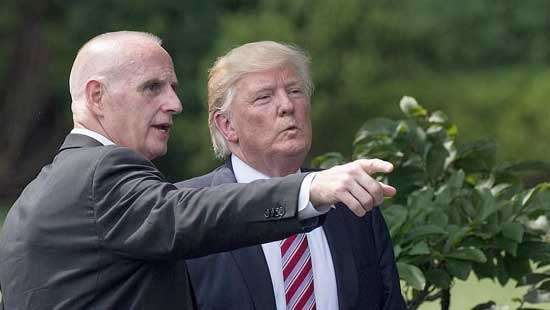 The leader of the failed Venezuela coup that has seen two former US special forces soldiers taken into custody has apparently provided security for Donald Trump.

Ex-Green Beret Jordan Goudreau, 43, can be seen in footage with an earpiece at one of the president’s rallies in Charlotte, North Carolina, in October 2018. He also claims to have provided security at a rally in Houston four days earlier.

The website for his private security firm Silvercorp claims he has planned and led international security teams for the President as well as the Secretary of Defence.   President Donald Trump Tuesday denied any involvement by the U.S. government in Monday’s failed attack.   ‘We’ll find out. We just heard about it,’ Trump said when asked about the incident and the Americans’ arrests.   ‘But it has nothing to do with our government.’

It has also emerged that he struck on the idea of a coup after meeting with Trump’s longtime bodyguard Keith Schiller and speaking with a billionaire backer.

Goudreau accompanied Schiller to a meeting in Miami with activist Lester Toledo, then Venezuelan opposition leader Juan Guaidó’s co-ordinator for the delivery of humanitarian aid.

The White House says Schiller cut off all contact with Goudreau after the meeting.