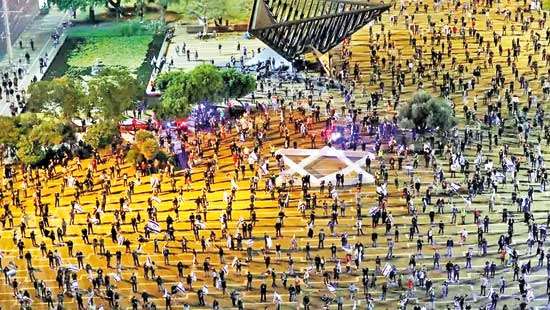 JERUSALEM AFP May5, 2020  – Israel’s parliament on Tuesday launched what it warned would be a “marathon debate” on a proposed coalition government deal, the legality of which has been challenged in the country’s Supreme Court.

A statement on parliament’s website said the bill to pass into law the contentious accord between incumbent Prime Minister Benjamin Netanyahu and his rival-turned-partner Benny Gantz faced about 1,000 requests for amendments from its opponents.

The 120-member parliament, which is fiercely divided on the issue, is scheduled to debate until around midnight (2100 GMT), resuming early Wednesday.

Voting is currently scheduled to begin at 4 pm (1300 GMT) on Wednesday and to last several hours, but a parliament spokesman said that timetable could change.

Former Gantz ally Yair Lapid, head of the opposition Yesh Atid party, is among the eight petitioners to the Supreme Court seeking to block the deal, while Gantz’s Blue and White party defended it in the two-day hearing which ended Monday.

If the agreement is torpedoed by the court or parliament, it is expected to send Israel into a fourth general election, after three inconclusive polls in a year.