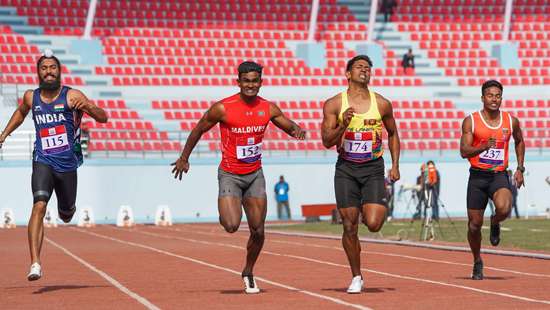 The islandwide curfew caused by the coronavirus pandemic has had a negative effect on the skill level of national athletes, according to the fastest man in Sri Lanka Himasha Eshan.

The national poolists comprising men and women athletes had been training daily for the past two months after a short break following their participation in the 13th South Asian Games (SAG) in Kathmandu with the aim of qualifying for the Tokyo Olympics but it came to halt on March 17 because of the adverse health situation in the country.

“Although it is possible to continue doing exercises to maintain our physical fitness, the lockdown period which is entering the sixth week has affected the speed and timing of track athletes,” Himasha told the Daily Mirror.

Crowned the fastest man in South Asia when he clocked a record time of 10.26 seconds at the SAG in India in 2016, a product of Miriswatte National School, Dodangoda and Kalutara National School, Himasha is one of the leading sprinters to excel at national and international level.

“I had great confidence that I would achieve the qualifying standard for the Tokyo Olympics. I was training with that target in mind,” said Himasha who is at a loss to understand how the 100m gold medal eluded him at the Kathmandu SAG in December.

“I got a good start. I was ahead of the other runners by two or three metres from the beginning. I thought it would be an easy race. Since I was overjoyed at leading the race I relaxed. But unexpectedly a competitor on my right Hassan from Maldives surged past me at the tape whereas I was more cautious of my Indian rival,” recalled Himasha.

With the Tokyo Olympics postponed to 2021 and international athletic competitions unlikely to take place in the near future, he has been languishing at home unable to find a place to train since he hailed from Kalutara which has been designated a high-risk area for the spread of coronavirus.

However, with the objective of maintaining his physical condition he is now stationed at Army Cantonment, Panagoda for which he is grateful to Brig. Janaka Ranasinghe.

“The 90s decade which produced star athletes such as Sugath Thillakaratne, Damayanthi Darsha, Sriyani Kulawansa, Susanthika Jayasingha and Rohan Pradeep (400m) is considered the golden era. However, a new era is dawning again because we have some outstanding talented athletes such as Aruna Darshana (100m), Indunil Herath (800m), Vinod Suranjaya (200m), Kalinga Kumara (400m), Amasha de Silva (100m) and Suganthi Lakshika (100m hurdles). If they are given the same facilities which athletes in the 90s had, I am sure they can win medals at the 2022 Asian Games and Commonwealth Games,” said
Eshan.