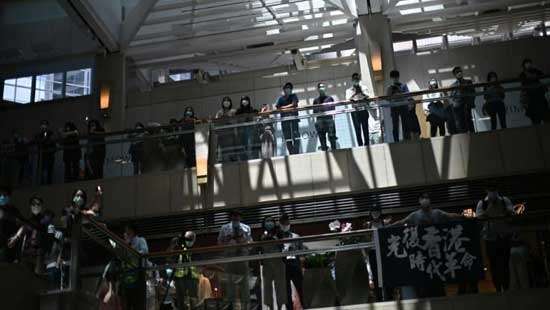 Riot police fanned out across Hong Kong on Friday after democracy activists threatened to defy a ban on gatherings during the coronavirus pandemic — but the streets remained largely calm.

The semi-autonomous financial hub was upended by seven months of violent protests last year, hammering its reputation for stability and leaving the city deeply divided.

But small protests have bubbled up in the past week and activists had issued calls to muster once more on May Day despite emergency anti-virus laws banning more than four people gathering in public.   Pro-democracy unions and social media posts called on people to gather in several neighbourhoods on Friday afternoon but the threat largely failed to materialise.

Hundreds of protesters did however gather in small groups at a shopping mall in the town of Shatin, chanting slogans and holding protest flags.

Riot police soon rushed into the mall and used pepper spray to disperse the crowd.   Shops closed their shutters as police occupied the mall and cordoned off most of the area.

The South China Morning Post reported 3,000 riot officers were on stand-by across Hong Kong with rubber bullets and tear gas at the ready.

Officers ramped up their presence on Friday, searching primarily young passengers at subway stations and surfacing in neighbourhoods where anti-government sentiment runs high.