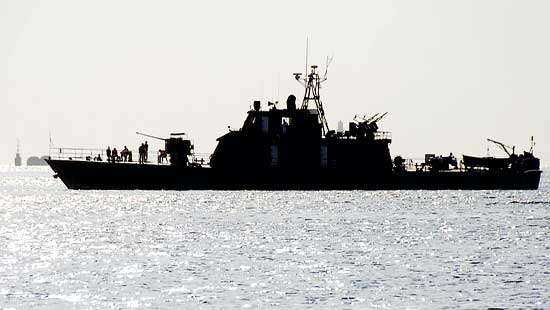 (rt.com) 22 Apr, 2020 –   President Donald Trump has ordered the US Navy to “shoot down and destroy” Iranian gunboats, should they harass American vessels at sea. His declaration comes after a confrontation in the Persian Gulf.

“I have instructed the United States Navy to shoot down and destroy any and all Iranian gunboats if they harass our ships at sea,” the president tweeted on Wednesday morning.

A week earlier, the US Navy accused the Iranian Revolutionary Guards Corps (IRGC) of “dangerous and provocative” actions, claiming that nearly a dozen Iranian vessels buzzed a group of American ships in the Persian Gulf. The US Fifth Fleet later published video footage of the encounter, which showed the gunboats circling a larger US ship.

Tehran brushed off the accusations, disputing the “Hollywood” scenario portrayed by the US. The Iranian government considers US naval activity in the gulf highly provocative, and condemned the patrol as “adventurism.”